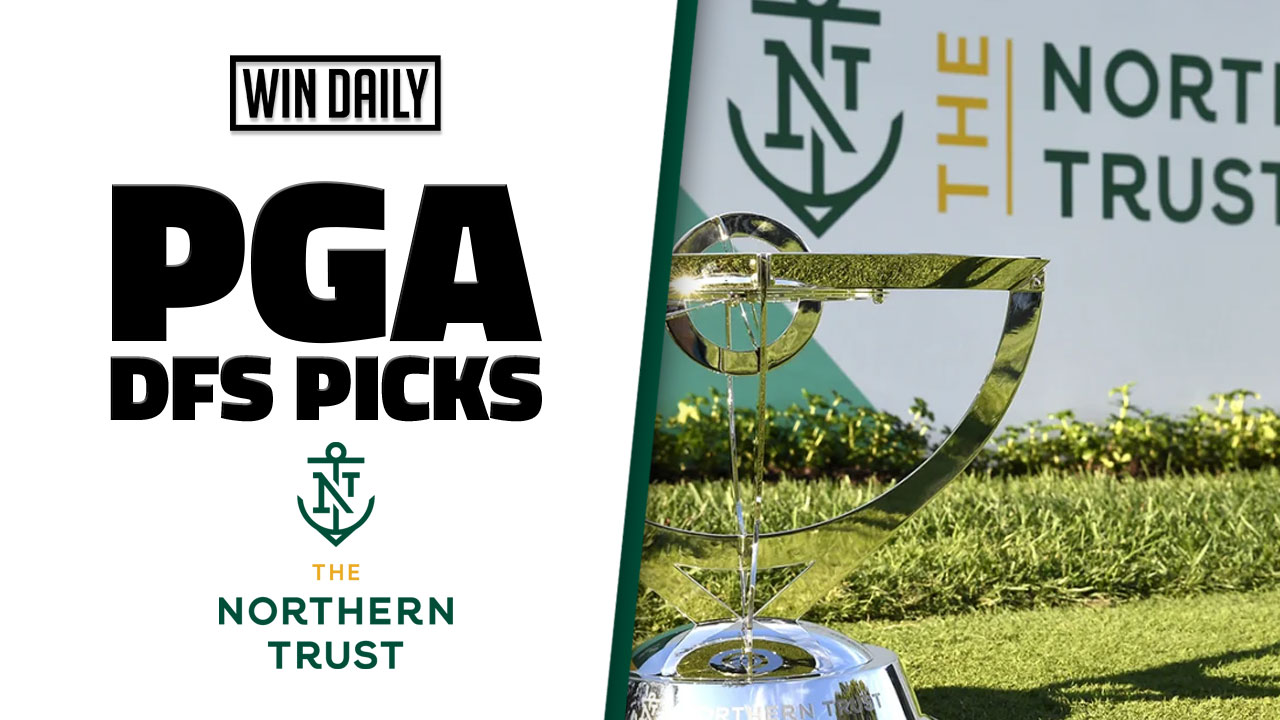 In this edition of PGA DFS picks, we’re looking for a big payday at the PGA Tour’s Northern Trust helping you find some winning teams in GPPs!

Jon Rahm (DK $11,500) – The No. 1 player in the world hasn’t played much lately since he was forced to withdraw from the Olympics after another positive COVID test. But his win at the U.S. Open and T3 at Royal St. George’s are proof positive he’s the frontrunner in the playoffs, and his complete T2G game and masterful short game combine to check all the boxes here. With pricing up, I like him best for GPP, but if you can find a cash lineup with him that you like, I wouldn’t blow it up.

Dustin Johnson (DK $11,000) – According to the PGA Tour stats, DJ was 23.53 total strokes better than the field average last year at TPC Boston when he ran away with the Northern Trust at -30. It was the third time he had gained 20 or more strokes en route to victory, and the change of venue shouldn’t hurt his game. He’s eighth in this field at Proximity from approaches 200+ yards over his last 36 rounds, he putts better on Bentgrass, and he makes for a great GPP play this week.

Jordan Spieth (DK $10,800) – Only a handful of players have been better at the 450-500 yard Par 4s over the past 36 rounds (solid GPP options Collin Morikawa and Rory McIlroy are a couple of them), and none of them can putt like Spieth can. Normally I wouldn’t look Spieth’s way for a cash game build in a field this good, but Sia really sung his praises in the excellent WinDaily Breakdown video, and Jordan has had such a great 2021 that I think I’m using him in cash and single entry as well as GPP.

Justin Thomas (DK $9,800) – JT hasn’t put it all together in a while (his last win was at the Players and he had lackluster finishes in the most recent majors) but he’s shown an affinity for playoff golf in the past and he’s tops in the field in SG: T2G over his last 24 rounds on courses over 7,400 yards in length. He was T12 here in 2019 and this is a good spot to jump back on the JT wagon in GPPs.

Abraham Ancer (DK $9,400) – The freshly minted PGA Tour winner (WGC-FedEx St. Jude) was runner-up of this event at Liberty National in 2019, and he’s got to be brimming with confidence after the huge breakthrough in Memphis at TPC Southwind. Ancer is fourth overall in my mixed model and I’ll have exposure in my GPPs despite the inflated price this week.

Scottie Scheffler (DK $9,300) – Scheffler could be described as a decent putter, and that’s probably the weakest part of his game these days. He’s posted top 15 finishes in six of his last eight events and he thrives on long golf courses like this. There’s a bunch of golfers to like in this price range, but Scottie could be the sneakiest once again.

Patrick Cantlay (DK $9,200) – While I have an aversion to Cantlay in PGS DFS and he had a really rough stretch earlier this year, there’s no denying that he’s played much better golf since the PGA Championship, when he finished T23 and won in his next start at the Memorial. He prefers these A-24 Bentgrass greens, is third on tour in SG: T2G in 2021 and he finished T12 here in 2019.

Harris English (DK $8,800) – English has been stellar over the past three months, winning the Travelers at TPC River Highlands, finishing solo third at the U.S. Open, and posting top 15s in five of his last seven tournaments. He’s coming off a solo fourth at the WGC-FedEx St. Jude and I can’t find a reason to dislike him at Liberty National, even if he ends up at a really popular play.

Patrick Reed (DK $8,600) – Reed won here in 2019, and in true Captain America form went 3-1-1 when the Presidents Cup was played at this venue in 2017. He missed the cut at the Open Championship and has had some trouble keeping the ball in the fairway lately, but he’s a brilliant playoff competitor and a great GPP pivot from the more popular players in this price range.

Adam Scott (DK $8,400) – Scott missed an easy birdie putt and lost in that epic six-man playoff a week ago after firing a five-under 65 in the final round of the Wyndham Championship, but his ascent up the FedEx cup standings was impressive enough for lots of golf writers to pick him to win this week. He has course history behind him, with a fifth-place finish in 2019 and a win in 2013.

Tony Finau (DK $8,200) – I’ve been burned many times by Finau but I’m adding him to my player pool based on Joel Schreck and Spencer Aguiar’s recommendation in the Breakdown. A closer look at his numbers shows he’s good at avoiding three-putts and his SG ARG numbers have improved. He’s not much of a threat to win, but he could be that value guy who finishes top 10 and helps you secure a GPP win.

Sam Burns (DK $8,000) – I haven’t seen Burns on too many ”top picks” lists this week, but he’s showing up in my mixed model and he’s coming off a blistering 64 in the final round at TPC Southwind that got him int a playoff with Ancer. He’s awesome off the tee, can get really hot with the putter, and the fact that nobody’s talking about him make me love him for large-field GPPs.

Tyrrell Hatton (DK $7.800) – Hatton will be a lot chalkier than Burns, but the price is way too low for what he gives you on courses this length. He’s sprinkled in some bad performances with a few top 20s, and he’s No. 17 on my mixed model, in large part due to how well he handles the 200+ approaches and A-4 Bentgrass. He’s a solid option in all formats.

Jason Kokrak (DK $7,700) – I had lots of Kokrak last week when he missed the cut at the Wyndham Championship, but there wasn’t anything on the line then and I’m going back to the well this week with some exposure in GPPs. I don’t want to be one week off and have no shares, but I’m not going overboard.

Shane Lowry (DK $7,500) – What a great price on Lowry! The 2019 Open champ is 20th overall in my mixed model and checks most if not all of the boxes in our focus stat categories this week. The form is good, he’s solid on all types of golf courses, and he’s got top 5 upside.

Cameron Tringale (DK $7,300) – I’ve been overconfident with Tringale a few times in PGA DFS, but I really like mixing in a few shares of him this week in GPPs based on where he finishes in my mixed model (ninth overall) and his solid numbers on longer approaches.

Seamus Power (DK $7,000) – Power will likely garner some ownership at this price, so if you’re getting skittish you can pivot elsewhere in GPPs – you can follow Sia’s lead and work in a guy like Charley Hoffman. But Power has been playing much better golf lately and works as a low-cost option.

Maverick McNealy (DK $6,900) – He really likes long golf coursesand was one of the first names I noticed under $7K with good SG: T2G numbers in his last 14 rounds. His SG: APP numbers leave a bit to be desired, but he’s really good off the tee and he can make some long putts.

Charl Schwartzel (DK $6,900) – Schwartzel fares well in my model (No. 33 overall) and seems to step up his game in stiffer competition. He also overperforms on long courses and should fare well at Liberty National, as the overall layout seems to favor his game.

C.T. Pan (DK $6,600) – I’ve seen some folks throw out Aaron Wise as another golfer with this price to consider, but if I’m leaning contrarian here, I’d do it with a Bronze medalist who’s coming off four rounds in the 60s. Pan is a sneaky contrarian play on longer courses and I like his chances to make the cut and spike a Top 25.

Matt Wallace (DK $6,500) – He checks a few important boxes this week (450-500 yard Par 4s and overall performance on long courses) and he’s solid around the greens and in wind. Wallace almost cracks the Top 20 in my mixed model this week so I’ll be mixing him into two or three GPPS in my 20 max builds.

Luke List (DK $6,400) – I’m always drawn to List when he’s cheap, but he’s strictly GPP only because he can implode on the greens. He’s scary to roster, so keep your ownership reasonably low (under 10%).

Hank Lebioda (DK $6,300) – Sia’s boy Hammerin’ Hank has a decent overall game and is a good ball striker. He offers plenty of value and should be a staple of stars-and-scrubs builds.