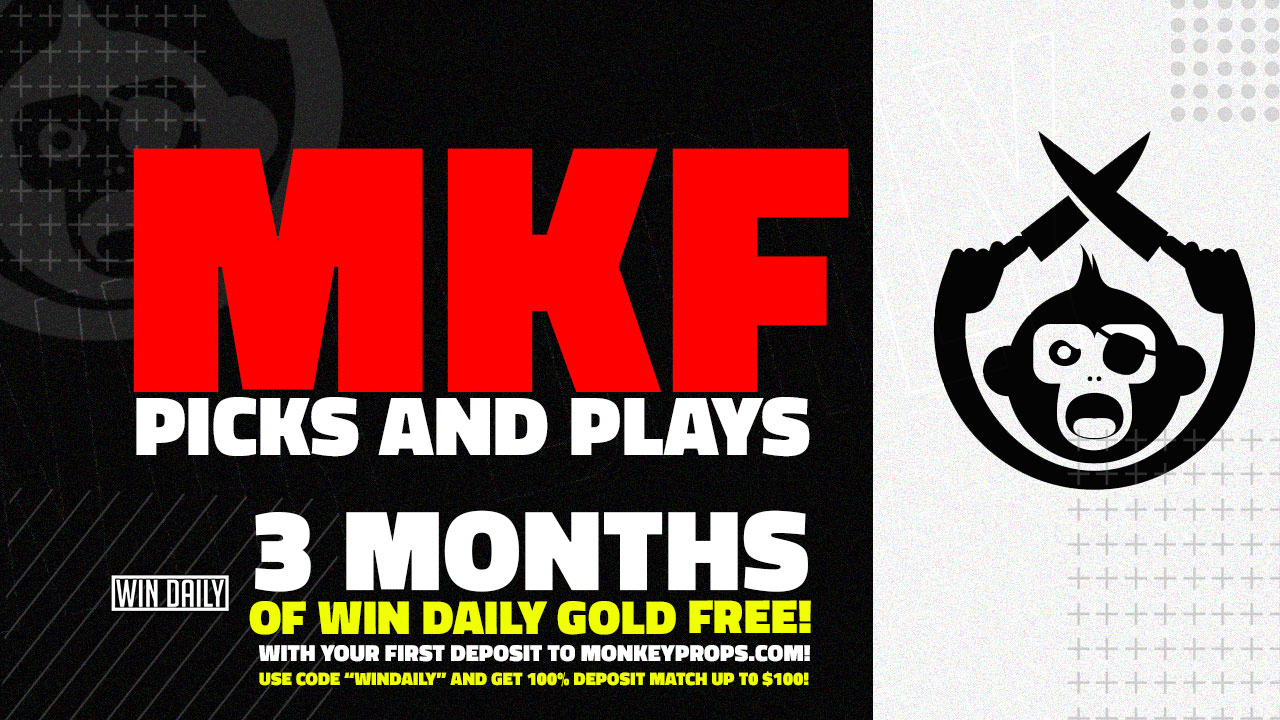 Win Daily Sports is proudly partnered with Monkey Knife Fight. MKF is offering you a FREE Win Daily Gold membership for three months ($90 value) simply for making your first deposit on Monkey Knife Fight. And if free gold isn’t attractive enough, they’re also offering a 100% match bonus up to $100 when you use promo code WINDAILY.

Now let’s take a look at Win Daily Sports: Monkey Knife NBA Finals 7.20 and see what we have to work with.

I’m not spending too much time on Giannis as if you are playing any Monkey Knife fight or DFS you know that he has been a man possessed since coming back from his injury, scoring at least 32 points in 3 of 4 contests and over 40 in two of them carrying the Bucks to a 3-2 lead and a possible title tonight. Booker has decided that the fate of the Suns is on him and his shooting woes are finally behind him shooting the ball 28 and 33 times in the last two games with a 35% usage rate. With the officiating crew so quick to blow the whistle inside I think we will see the Suns opt to score from outside a bit more giving Booker even more opportunities to score than usual. He has not been as effective from three-point range lately but that is still the achilles heel of the Bucks in 2020-2021.

Devin Booker: Over Jrue Holiday Over

Already talked Booker above. The Jrue line is a full assist off in my opinion. His floor in the last ten outings has been seven assists with him having at least nine in 7 of 10 and at least 12 in three of them while playing 40+ minutes a game. On the season he only averaged 6.7 a game but at this point in the playoffs, he is also playing around 4-6 minutes more than he typically does. In a contest where the Bucks can close it out, it makes no sense for him to play less than 44 minutes if it stays close making this 7.5 prop one that I would jump on.

More or Less: Let’s get a little crazy

Alright, this is just for fun and what may be a final hurrah so let us throw five dollars at something we can get a 125x return on. I am playing the Scott Foster narrative so if you are someone who plays underneath and can not hit from outside I am giving a bit of a downgrade. CP3 and Middleton do not fit that bill but CP3 has a mental block with him on the court and if I think Jrue and Giannis go off I do not think that leaves much room for Kris. Crowder has been playing much better as of late scoring no less than 10 points in four straight and I think he sees close to 40 minutes tonight. Lopez can shoot from outside and I have some concerns that Ayton will be in foul trouble again. Just have a little fun and play around with this one. I am not taking it too seriously. We may not get another NBA game after tonight.

If I see anything else I like I’ll be sure to put it into our Discord before tip.

Hope you enjoyed my Win Daily Sports: Monkey Knife NBA Finals 7.20. I look forward to more content covering all of the sports MKF has to offer. Any questions about the breakdown, I will be available all day in the WinDaily Discord chat. Don’t forget to subscribe to the WinDaily Youtube channel and follow me @stoweby and @WinDailySports on Twitter to stay current and up to date on all of our fresh new content!

NFL, MLB, and Prop content creator for Win Daily Sports since early 2020. Active Army Veteran 2002-2010. 18 years as an Aerospace Structures R&D Technician (If you've flown, my hands have likely been on it). Small Business Owner. Animal Rescue Volunteer. Foster Parent. I study way to much film to not be a football coach somewhere but I still can use it to teach you all Fantasy Sports.