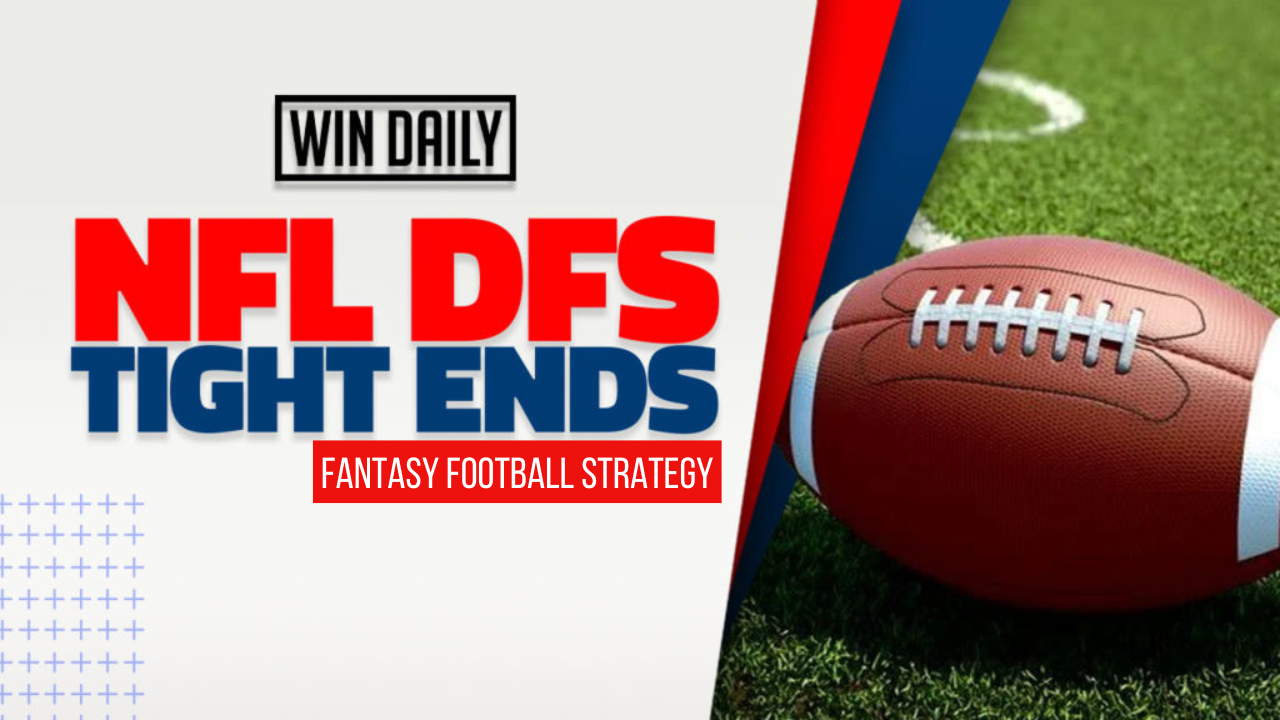 I really hope that you had some Cole Kmet exposure last week. His ownership will continue to rise with the meteoric ascension of Justin Fields, and that is just fine. Last week was a great one for us in the Tight End article. Dalton Schultz had his way with Green Bay (6-54-1) and Tyler Higbee was the only player on the Rams who wasn’t embarrassing (8-73). Greg Dulcich was a dud, but the entire Broncos roster is a dud now. Let’s keep it rolling for Week 11!

Be sure to jump into the WinDailySports Discord, and take advantage of our cheat sheets and projections while you build your lineups for Week 11 on FanDuel and DraftKings! Let’s continue to finish strong this season!

This week is a frustrating one. George Kittle is in a SMASH spot…not on the main slate. Travis Kelce and Gerald Everett? Not on main slate. Regardless, we move on as usual.

The return of Dak Prescott has vaulted Schultz back into the upper echelon of Tight Ends. Schultz has hauled in 17 of 20 targets (187 yards and a score) over three weeks since “Return of the Dak”. Side note, “Return of the Mack” is the most underrated song of the 90s. Argue with your momma.

Regardless, Schultz has a cement role in a good offense in Dallas, and is in a good spot again. The Vikings are 21st in the NFL in fantasy points allowed to opposing Tight Ends. Schultz will be a busy man in what may just be the best game of the week.

Sure, Christian McCaffrey to the 49ers was HUGE. I’d argue that the Vikings’ addition of Hockenson was the single best move at the deadline. He has been a target machine since his arrival in Minnesota, catching 16 of 19 targets for 115 yards across a pair of games.

The touchdown upside may be capped by the Vikings having elite options at WR (Jefferson) and RB (Cook), but who cares? Hockenson has picked up the offense immediately, and needs to be one of the first Tight Ends you consider in Week 11. We have seen his upside, and now he has established one of the highest floors at the position.

Dallas ranks 8th in the NFL against Tight Ends, per fantasy points allowed. I’ll use a term my kids use…DILLIGAF. It stands for “Does It Look Like I Give A F”. And I don’t. Hock is one of the best in the game, and the Vikings offense is a perfect home for his skill set.

It pains me to suggest a player against my beloved Cincinnati Bengals in what amounts to a must-win for the team. In DFS, playoff positioning takes second fiddle. The Steelers offense is a trainwreck. They haven’t scored more than 20 points in a regulation game a single time this season.

“The Freir” has been one of the few bright spots in this offense. His role is solid, and he makes for a good option here against a Bengals defense that is middle of the pack against Tight Ends.

Pat has 23 targets over the last three weeks. With an offense that seems incapable of big plays down the field, Freiermuth should be busy underneath. The ceiling isn’t there, but he makes for a safe play with a small bit of upside here in a positive game script.

Darren Waller is on the IL, and so is the Raiders’ season. Feigned optimism has come out this week from Derek Carr and Davante Adams, but nobody is buying it. This team has underachieved all season as Josh McDaniels shows once again that he is an incapable Head Coach in the NFL.

Regardless, Moreau is now thrust into the starting role with Waller on the shelf, and he has proven capable. He is coming off a solid week (3-43-1), and now gets a Broncos team that is 17th in the NFL against opposing TE. Denver has been solid on the defensive end, but they can be beat with Tight Ends. Both of these teams are in competition for ONE thing: biggest disappointment in the NFL in 2022. Best of luck to both sides.

My favorite guy is back once again. I’ve been writing him up all season, and am stoked to see him and Justin Fields find success. No Tight End is close to the 9-115-4 that Kmet has posted the last two weeks. His ownership should be higher than Josh Gordon in this one.

Atlanta is bad defensively against, well, everyone. They rank 23rd in the NFL in fantasy points allowed to opposing Tight Ends. Kmet is still cheap, he has shown upside, and the Bears WR have not. His rapport with Fields cannot be taken for granted here. Sure, you’re buying a ton of ownership once again, but that doesn’t scare me off him. Hop back on the Kmet train with me. Bears country, let’s ride!

Come find me on Twitter and let’s chat some football! Good luck in Week 7, and let’s meet at the top of the leaderboards!