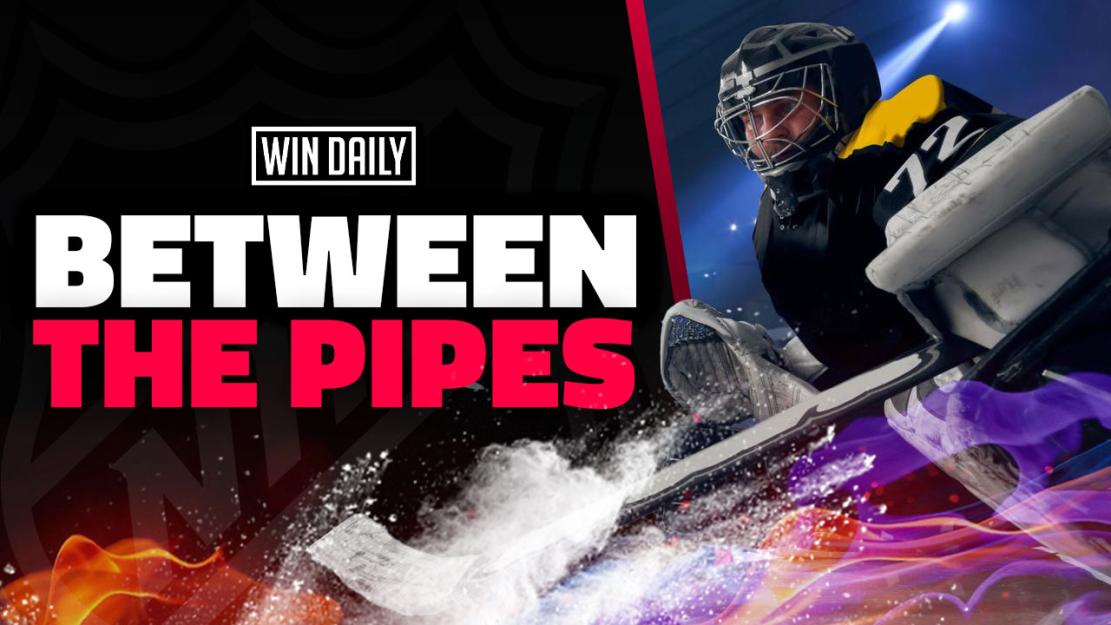 Welcome to Thursday’s edition of Between the Pipes.   We have a fairly large 11-game slate of NHL DFS to navigate through tonight.  22 teams mean 22 different goalies and that means a lot of options.  My goal here will be to get you the goalie with the most upside and best chance at not killing your lineups.

Let’s dig in and see if we can find goalies that will take us to the top of the leaderboards!

Fresh off an OT victory that went to a shootout, the Buffalo Sabres get to go head-to-head with the juggernaut that we like to call the Colorado Avalanche.  Playing with tired legs against the Avalanche is not ideal and it’s going to present some challenges for them.  The biggest challenge for them though will be trying to get pucks past Alexandar Georgiev.

Georgiev is coming into this playing extremely well.  During the month of November,  Georgiev sported a 2.24 GAA and a .932 save percentage over 8 starts.  He also had a 7.21 Goals Saved Above Average (GSAA), one of the highest marks of any goalie playing tonight.  The Sabres are a tough team, but with them playing more than a full game last night and the Avalanche coming in fresh, I love this spot for Georgiev.  He’s playable in both Cash and GPP’s tonight.

If Karel Vejmelka played on any other team besides the Coyotes, he’d probably be more of a household name.  He had himself an absolutely outstanding month of November.  In 9 starts, Vejmelka averaged over 33 saves per game and had a 2.15 GAA.  His 9.24 GSAA is by far the highest number of any goalie expected to play tonight.

With a matchup against the Kings tonight, it’s set up for Vejmelka to get a decent amount of volume.  The Kings have been taking around 33 shots on goal per game and if we compare that to the 37 that the Coyotes are giving up, we have a team that likes to shoot and a team that likes to give up shots.  Vejmelka is far from safe so I’m going to reserve him strictly for GPP’s tonight.

Can anyone stop the New Jersey Devils?  I can tell you one thing, it’s not going to be the Nashville Predators, a team scoring just 2.4 goals per game over the last 2 weeks.  In a great matchup vs. the Ducks the other night, they scored just 2 goals, and that was with extra time in OT.  Tonight they’ll have a much tougher task against the top team in the NHL.

In net for the Devils tonight should be Vitek Vanecek, one of the top goalies in the NHL this season.  Vanecek played great in November, stopping 93% of the shots that came his way and giving up just 2.13 goals per game.  The thing with the Devils though is that they don’t give up much in the way of shots.  Over the last 2 weeks, teams have just 30 shots on goal vs. them.  Ideally for GPP’s, we’d see a bit more so this is going to be strictly a Cash play for me tonight.  Especially at his current price on DK.

It’s nice to see that Philly can’t have it all.  While the Eagles, Sixers, and Phillies have been the toast of the town in 2022, the Flyers have not.  They are currently in a rough stretch of it, going 1-4-2 in their last 7 and scoring just 2.14 goals per game over that stretch.  That has me somewhat on Vasilevskiy tonight.

While he’s been playing just a little better than average over the last month, he is still one of the best goalies over the last few years and with a matchup tonight, he should return to his glory days.  Even though this game will be played in Philly tonight, the Lightning are heavy favorites at -215.  Vasilevskiy should get the W tonight and should pay off his sub $8k DK salary tonight.

These are the 4 goalies I’ll be using tonight.  For Cash, my leading guy will be Vanecek, followed by Georgiev and Vas.  For GPP’s, I’ll be riding Vejmelka with a bottle of Tums right next to me!

Good luck and hope to see you in the green.

Make sure you follow me on Twitter at @rangerzfan79 and be sure to sign up for an ALL-ACCESS GOLD ACCOUNT here at Win Daily Sports. Gain access to our Projection Models and jump into our Discord where we will have our experts talking plays across every sport and slate!