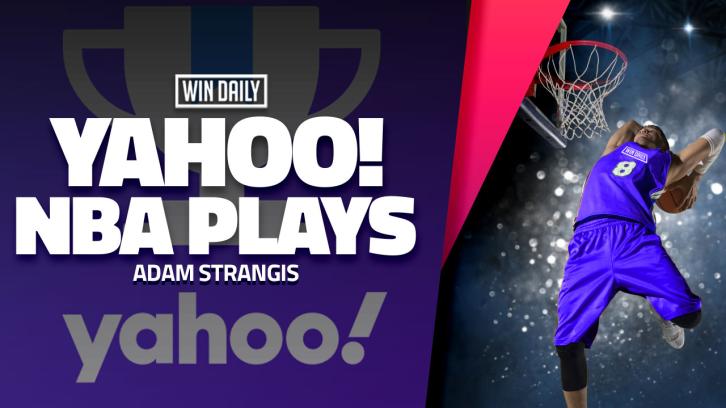 Welcome into the Tuesday edition of the NBA DFS Yahoo Cash Plays 1/25, otherwise known as the New Orleans Pelicans Party! They’re missing four of their starters tonight so they are heavy chalk and you will need a minimum of two Pelicans in cash tonight if not three. Let’s outline who you need to be looking at in cash games on Yahoo tonight!

The scoring is FanDuel-style so always be sure to look at the Projection Model. Ghost spends a TON of time on this, and it’s the most valuable tool for NBA DFS we have. While it’s not a one-to-one translation because of the salaries, it’s still a great place to start. Yahoo has eight positions to fill with a $200 budget, different than any other site. The goal here in this article will outline some of the most popular plays since cash is king, and then we set the cores in the Win Daily Discord.

There is almost no way around NAW playing 35 minutes or more tonight and there are plenty of shots to go around with just nine players for New Orleans available. The field is taking the approach of playing Alexander-Walker and James Harden at point guard and guard on Yahoo tonight, and locking them in $61 of your salary cap allows for $23 per player for the other six spots. NAW took 13 shots last night and that was with Jonas Valanciunas, Devonte’ Graham, and Josh Hart all active. He should approach 20 FGA tonight and has 40 Yahoo point upside.

Note- If De’Aaron Fox gets ruled out, Tyrese Haliburton is a fantastic option and is a run-back for our next player.

With so much value coming from the Pelicans side of things tonight, we have the luxury of spending on multiple positions and Tatum is an easy call at an underwhelming position. Small forward is typically a pain to fill unless there’s a marquee player or a strong punt and Tatum faces the Sacramento Kings tonight, an uptempo matchup that can bring out the ceiling for his scoring prowess. Tatum is sixth in points scored from isolation this year and the Kings allow a 43.6% FG% in that play type. The Kings are also eight in pace, a sharp contrast to 25th for Boston and with Tatum having a 32.6% usage rate and 1.18 Yahoo points per minute, he’s the perfect fit in a cash build.

We’re back to the Pelicans and there is a strong argument to be made on Yahoo that Jaxson Hayes is the better GPP play. Both players are the top two centers in popularity but Hayes is currently about half the rostership as Hernangomez and frankly, neither have a fun matchup tonight. Joel Embiid waits on the other side and he’s co-leading the league in foul shot attempts, so these players will have their hands full. Hayes could see more floor time with Embiid off, but Big Willy Style is checking in at over 40% for rostership and with JoVal off the floor, he produces 1.23 Yahoo points per minute. You don’t have much choice but to play him in cash settings right now.