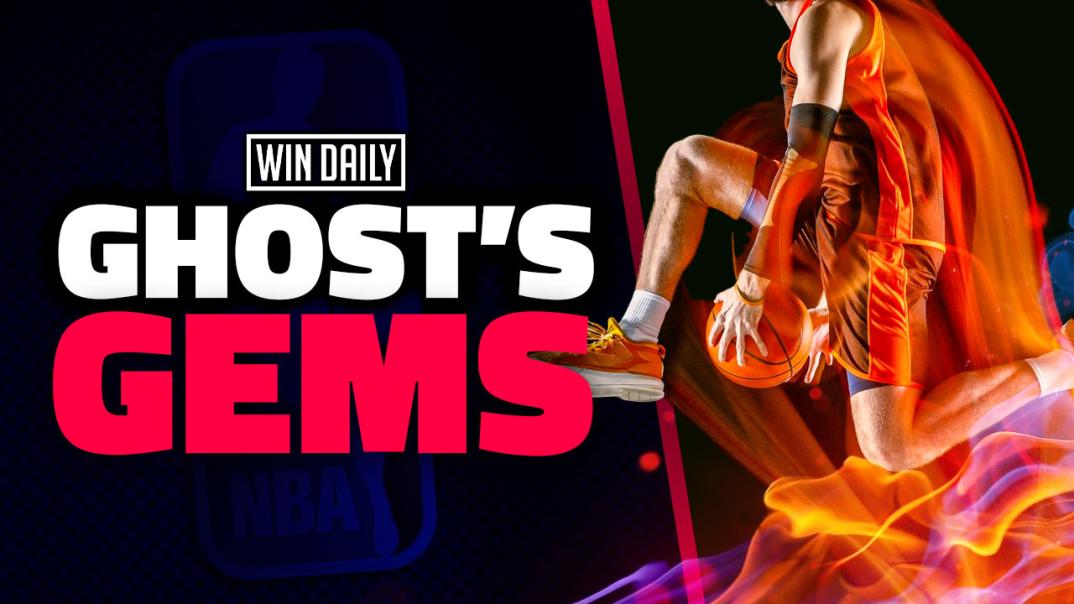 The NBA is back with another six teams in action tonight. Similarly to how we saw on Tuesday, strategy is key on small slates. It’s a Thirsty Thursday edition of the Gems – let’s ride.

With only six teams in action tonight, a single injury or rotation change can alter the slate. Moreover, these are teams that have the most complicated injury reports in the league. Thus, be sure to use our proprietary NBA projections and cheat sheet to build your lineups as the news rolls in. Moreover, join the conversation in the Win Daily Discord to get the insight you need from both subscribers and staff.

There is no way to analyze this rotation until we see the Clippers’ final injury report. Thankfully, this is the first game on the NBA slate. With so many players missing the front end of their back-to-back, LA can have a thin rotation tonight, depending on how the dominos fall. Both Paul George and Kawhi Leonard, who played last night, are rest candidates, in addition to Reggie Jackson. Moreover, John Wall, Marcus Morris Sr., Norman Powell, and Luke Kennard all missed last night’s game. There will be plenty of value in this game, beginning with the Clippers.

Similarly to the Clippers, the final injury report for the Heat will dictate how the chips fall. The biggest domino of them all is the availability of Jimmy Butler, who is questionable due to conditioning. Should he miss a second straight game, Tyler Herro instantly becomes one of the most popular plays on the NBA slate. Herro has now posted 20 or more points in four straight contests, averaging 26.3/6.8/5.8 on 53.4% shooting through a 26.5% usage rate. The status of Jimmy Butler truly dictates how the Heat will look, which we’ll have to wait on.

Should Kevin Porter Jr. miss this game, Jalen Green becomes one of the most enticing options on tonight’s NBA slate. While he has been inconsistent with his shot, Green faces a San Antonio defense that ranks 26th in the league versus combo guards. Moreover, Green leads the team in usage rate this season, but sees a drastic shift in production with KPJ off the floor. His usage rate climbs to 33.5% from 28.9%, while his fantasy points per minute increases from 0.99 to 1.13. Elsewhere, Alperen Sengun gets a friendly matchup versus a Spurs interior that ranks 25th in the league versus true centers. Moreover, the Spurs rank 29th in points allowed in the paint per game with over 54 allowed nightly.

Issues are piling up for the Spurs. Not only is their injury report ridiculously lengthly, but they are 1-16 in their last 17 games. However, they are a mere underdog in this matchup. Jakob Poeltl, Keita Bates-Diop, Jeremy Sochan, and Blake Wesley are all out. Meanwhile, Devin Vassell is doubtful to play. Thus, both Tre Jones and Keldon Johnson are in for a heavy workload on offense tonight, flanked by the likes of Doug McDermott and Josh Richardson. There is also potential value here with Isaiah Roby and the rest of their frontcourt. In summary, make sure to check our projections to see where the value lies because it is with the Spurs on tonight’s NBA slate.

While I hopefully talked you off on Nikola Jokic in their matchup versus Dallas, where he posted a mere 42 fantasy points, I’m hoping to talk you into him tonight. Now, this strategy is only feasible if the Spurs value grades out well in my projections. However, should it do so, the back and forth between Jokic and one of four Trail Blazers is the route to take on this NBA slate. Despite only being third on his team in usage rate at 26.5%, Jokic has the upside to dominate this matchup. Portland currently ranks 24th in the NBA against true centers. Moreover, Jusuf Nurkic and Jerami Grant have two of the worst defensive ratings amongst qualified players. If you choose to go the Keldon Johnson/Tre Jones route with Spurs exposure, then Aaron Gordon/Jamal Murray/Bones Hyland are the Nuggets you can look at.

After missing seven games, Damian Lillard made his return to the lineup last game in a victory against Indiana. Lillard posted over 40 fantasy points in his return, but did shoot 7-for-16 from the field. However, he did make five three-pointers on ten attempts. Denver currently ranks 19th in the NBA in three-pointers allowed per game, while also ranking 20th in three-point percentage allowed. Similarly to the strategy described above with Jokic, should you choose the midrange route for Portland, then Anfernee Simons and Jerami Grant are the targets. Specifically, Grant has posted 27 or more points in six straight games. During that span, Grant has averaged 32.2/2.8/3.7 on 47.7% shooting through a 32.6% usage rate.