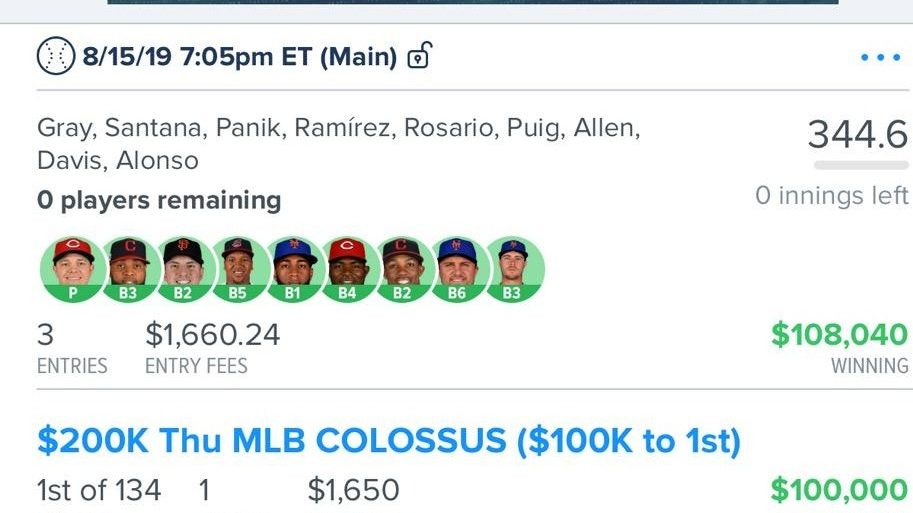 Today we are here to celebrate and congratulate one of our own, @TenaciousDJONES, on his six figure win last night. He rode an Indians/Mets stack to FanDuel glory. Details and how to get advice from David are included in this 8/16 MLB DFS Report.

DFS Pro David Jones, one of our featured analysts on Win Daily, took down the $200,000 MLB Colossus on FanDuel with a grand prize of $100,000 on Thursday night. The contest had an entry fee of $1,650. The following lineup put David at the top of the tournament: Sonny Gray, Carlos Santana, Joe Panik, Jose Ramirez, Yasiel Puig, Greg Allen, J.D. Davis, Pete Alonso. You can get advice regularly from David on Win Daily as a free member or talk to him one on one in our Premium Gold Slack Chat throughout the week.

Huge Congrats to our very own @tenaciousDJONES who won over $105,000 tonight!! What a beast!! Shoutout to our subs who followed his sneaky slack stacks #DFS https://t.co/50RJUFqFGR pic.twitter.com/d7O5tlNbnm— Win Daily (@windailydfs) August 16, 2019

Both teams exploded last night and Tenacious D was all over them in pregame:

If you already have a free registered membership, we suggest upgrading to our Premium Gold monthly membership plan for regular access to all of our premium products, including our exclusive cheat sheet and slack chatroom.

You can see that line of recommendations was in our Premium Gold slack chat room. We are worth the couple of cups of coffee a month that it costs to join.

The other games Tenacious D loved was in the Bronx. Though he mentioned the Yankees, he stacked the Indians in his winning lineup.

Some highlights from the 19 runs the Indians scored: Carlos Santana with four runs and three RBIs, including 2 HRs; Greg Allen with four each of RBI, runs and hits including a HR and Jose Ramirez with two HRs and six RBI. Ramirez had his counting stats by the end of the second inning.

8/16 MLB DFS Outlooks: Not surprisingly, the Indians are in the playoff hunt. In the lead for the AL wild-card by two games over Tampa Bay, three and a half over Oakland and nine and a half over Boston, they are also chasing Minnesota for the A.L. Central lead. They are only one-half game behind the Twins.

The Mets are surprisingly in the N.L. playoff chase. They are two games behind the current second wild-card leader, the Cubs. However, the Mets have many more teams to deal with than the A.L .contenders do, with Arizona, San Francisco, Philadelphia and Milwaukee all on the outside looking in but within three and a half games.

Also, David’s pockets will be fatter the rest of the season. Here is the final screenshot: