This article is full of players that I haven’t written up at all this season and that actually makes me feel good. I think we found some gems here at some affordable prices and we’re really hitting our stride over these last two months. We also have another free Monkey Knife Fight play for you and that’s a great sign considering I’ve hit eight of my last 10 plays! Let’s get into our 8/9 DFS Pitching Plays!

Buehler is sneakily putting his hat in the ring for N.L. Cy Young and it’s a wonder why more people aren’t talking about this kid. If you take out one flaky start at Coors Field, Buehler is pitching to a 1.80 ERA and 0.78 WHIP while striking out 90 batters in 65.2 innings over his last 10 starts. Those are bonkers statistics and it’s even scarier when he’s at home. Since the beginning of last season, Buehler has a 2.30 ERA, 0.80 WHIP and 10.8 K/9 rate at Dodger Stadium.

Facing Arizona is simply a bonus, with Buehler allowing just four runs and 11 baserunners across 15 innings in his last two starts against the D’Backs while striking out 20 batters. That’s no surprise with Arizona ranked 16th in xwOBA and 18th in xSLG. Not to mention, Buehler enters this game as a –200 favorite with the Diamondbacks projected for fewer than four runs.

It’s strange to recommend Teheran as a cash game pitcher but I’ve been riding him all season when he faces the Marlins. In three starts against Miami this season, Teheran is pitching to a 0.00 ERA and 0.70 WHIP while striking out 15 batters in 18 innings of action. Yes, that’s three shutouts and it’s really no surprise when you consider this matchup. The Marlins currently rank bottom-three in runs scored, OBP, OPS, wOBA, xwOBA, SLG and xSLG. That’s particularly scary considering this is arguably the best pitcher’s park in baseball.

I don’t want to toot my own horn but I posted this in our Slack channel on June 26.  —> 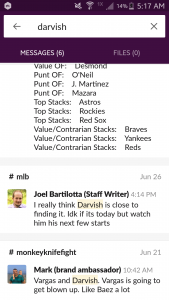 Since then, Darvish has at least 42 FanDuel points in four of his last six starts while providing a 2.78 ERA and 0.84 WHIP in that span. More importantly, he has 68 Ks across his last 53.2 innings pitched, which is simply one of the best K rates in the Majors.

That’s the guy that I’ve been waiting for all season long and we have to love this improved play in a matchup like this. Not only did the Reds get rid of Yasiel Puig and Scooter Gennett at the trade deadline, they also may be without Derek Dietrich (IL) for this game. That’s truly frightening when you consider that this lineup already ranks 22nd in runs scored, 23rd in OPS, 29th in xSLG and 26th in xwOBA.

Smith is actually a decent cash game play too, as he simply has some of the best stuff in the league. A 3,35 ERA and 1.05 WHIP speaks loudly but a 30.2 percent K rate is downright incredible. In addition, Smith has at least 6 Ks in 15 of his 18 starts this season, which is why he scored at least 30 FanDuel points in all 15 of those games.

Getting to pitch in a spacious ballpark like Marlins Park should only help, with Smith generating a 2.66 ERA, 0.97 WHIP and 11.4 K/9 rate at home this season. That totally limits the risk from this tough matchup and the implied run total of 4.1 for the Braves tells you that Vegas agrees with this assessment.

I only call this a punt play because I anticipate Keller being one of the lowest owned pitchers on this slate. These numbers truly surprised me and Keller has established himself as the Royals best pitcher. A 3.95 ERA and 1.33 WHIP may look like nothing special but he’s really turned things around recently. Not only has Keller thrown at least 5.2 innings in six-straight starts, he’s also pitching to a 2.20 ERA and 1.10 WHIP in that span.

He did that damage against good offenses like the Twins, Braves and Nationals, as he’ll get quite the cupcake matchup here. In fact, the Tigers rank 29th in xwOBA, 30th in wOBA, 29th in runs scored, 30th in OBP and 28th in K rate. That makes it no surprise that Keller threw eight one-run innings the last time he faced the Motor City Kitties on July 13 en route to a season-high 52 FanDuel points.

The Rockies are just horrible right now. Losing 23 of their last 31 games says a lot and much of it has to do with their road offense. After ranking 29th in road OPS last season, Colorado finds themselves 25th in runs scored, 29th in OPS and 30th in OBP on the road this year. They also sit 23rd in K rate and they’re simply one of the best offenses to exploit outside of Coors Field.

That’s big for an average arm like Quantrill, who’s actually in the best stretch of his career right now. A 3.57 ERA and 1.19 WHIP for the season is impressive in its own right but he also has a 1.84 ERA and 0.92 WHIP over his last seven appearances. That’s all you can ask for from such a cheap pitcher in such a tasty matchup and the 4.2 implied run total for the Rockies only adds to Quantrill’s value.

With the Tigers ranked bottom-two in runs scored, OPS, OBP, wOBA and xwOBA while sitting 28th in K rate, Keller should reach this prop at relative ease with his recent form. 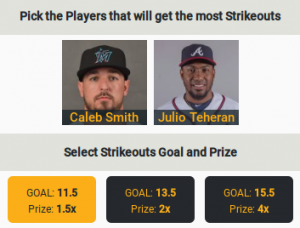 This is self-explanaory after the previous write-ups, as either one of these guys could reach 7-8 Ks on their own.