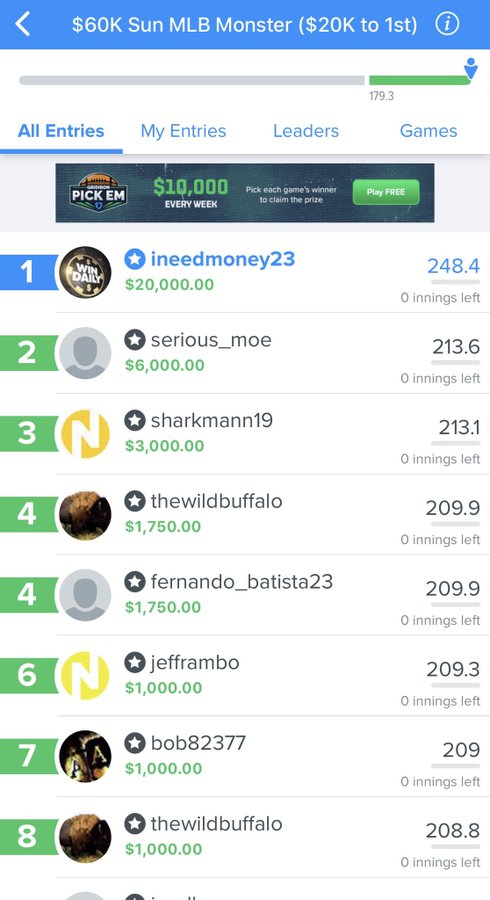 A flash back at some of the best performances from the 8/26 MLB DFS slate plus their outlooks for the remainder of the season.

Our leader had a very prolific weekend, finishing second in the FanDuel MLB Monster on Saturday, winning 10K. He then came back to take the same tournament down on Sunday, finishing first and earning 20K!

Our founder @jasonmezrahi wrote a book called “Win Daily” . He spoke about hot streaks/cold streaks and sticking in the game with the right mindset and to always trust your process. Yesterday he finished 2nd in the Monster with 1 bullet, today his sent 1 back in and took it down! The lineup was Nova, Goldschmidt, Altuve, Carpenter, Bregman, Edman, Bader, Reddick, Reyes.

Outlook: Jason adds to his incredible DFS history by winning big on back-to-back nights for the first time in his highlight-filled Fantasy career. He is also our second big staff winner this month, as David Jones won 100K on FanDuel. Get regular access to Jason and our DFS Pros in the Slack Chat Room and on our cheat sheets as a Premium Gold subscriber!

Our founder and CEO Jason Mezrahi was all over Goldschmidt in this matchup on the Premium Gold Cheat Sheet as a value pick. He went 2-for-4 with a double, a run and a pair of RBI.

Outlook for the rest of the season: His numbers are down in his first year as a Cardinal. Goldschmidt isn’t putting the ball in the air as much as he had in recent years. Even with that stat, he is still at 29 HRs this season. Expect him to continue hitting and for a team that is surging right now.

Another great pick by Mezrahi here as Donaldson was a beast in New York against the Mets. He went 2-for-4 with a pair of solo home runs and was the entire Atlanta offense.

Outlook for the rest of the season: The probable Comeback Player of the Year is swinging the stick at a ridiculous rate. He is now at 32 long balls on the year. He’s a key factor to this young Braves team with a veteran leadership and stroke at the dish. He could be the reason they hold off the Nationals in the NL East.

The Data Driven Pitcher Projection Model expected a solid performance from Reynaldo Lopez and he delivered. Lopez went five no-hit innings with two walks and six strikeouts while picing up his eighth victory of the season. He didn’t give the length that opens a lot of eyes but it was a great outing.

Outlook for the rest of the season: The second-half Lopez has been a lot better on the mound than the beginning of the season. He has a 2.82 ERA in 54.1 innings since the break. Expect him to be a solid pitcher and be a big piece in the rotation for the White Sox in 2020 and beyond.

Both guys had the Astros as a team to stack and that was a money pick. This pick didn’t make its mark until the late innings as they scored nine of their 11 runs in the last two innings of the game. Eleven runs, 10 hits and six walks as a team at the plate is something that will get the job done in DFS.

Outlook for the rest of the season: This offense is one of the best in baseball. They are facing a weaker division and rank top-five in every offensive category, including leading the majors in OBP. This offense can keep hitting and helping their potent pitching staff to compete for the best record in the major leagues.