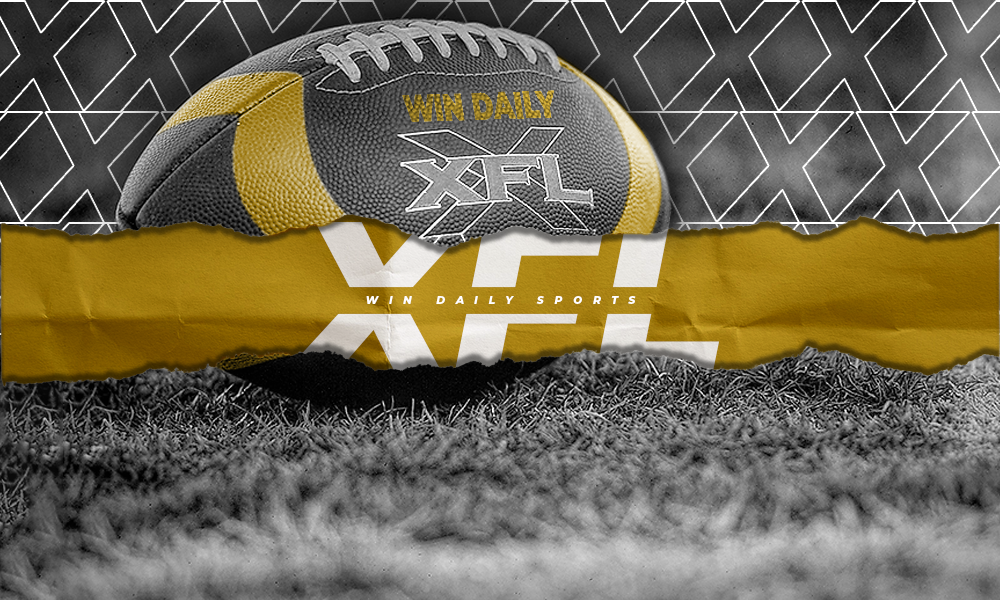 Week 3 of the XFL DFS season is here on DraftKings! XFL DFS Week 3 is here and we have got a whole bunch to cover before it starts. We finally have a larger sample size to work with, so it will be interesting to see whether things remain trending from Weeks 1 and 2. For all stats on the games, you can click here for live XFL stats. Make sure you check out my recap from Week 2 for additional tips.

My favorite value wide receiver is probably Reece Horn ($4,200). He is the primary slot receiver for the Vipers and the Roughnecks have had a ton of issues covering slot receivers in their past two games. He saw 85% of the snaps from the slot the last two weeks; 97% of his snaps were from the slot just last week. All of his eight targets in Week 2 came from the slot. Nelson Spruce and Pierson-El both scored over 20 fantasy points when they played Houston as their team’s primary slot receiver. I do expect somewhat of a bounce back from Tampa Bay as a whole on offense in Week 3.

Update: Their primary tight end for the Vipers Nick Truesdell has been downgraded to out along with Aaron Murray. Truesdell saw 11 targets total over the past two weeks so other pass-catchers should see more work. That probably bodes well for Daniel Williams ($8,200) who’s snap share decreased significantly in Week 2 (24 routes run) after 42 routes run in Week 1.

The other great value wide receiver play is Nick Holley ($4,400) for Houston. He was second on the team in receiver snap share and frequently works the slot position of the field.

DeAndre Thompkins ($5,700) for the Defenders is way to easy to fit in especially as he emerged as the number one receiver for D.C. in Week 2. He led the Defenders in receiving yards and tied Eli Rogers for the target share lead with nine targets.

The other real cheap wide receiver you can target is LA Wildcats’ Adonis Jennings ($3,000). With both Saeed Blacknall and Tre McBride, questionable Jennings would profile as the locked-in number three wide receiver. The Wildcats have not heavily featured running backs or tight ends in their offense up to this point in the season so Jennings would be a very cheap way to roster targets in your DFS lineups. Jennings has run more routes over the past two weeks than Jordan Smallwood ($7,200) but has just three receptions for 26 yards on eight targets.

So no surprise here you are going to want to pay-up for Nelson Spruce ($10,900). Spruce leads the XFL in yards/route run of any player with at least ten targets. The same goes for Cam Phillips ($11,100) who is now listed as probable. I prefer Spruce because I think that the game will be more fantasy-friendly and his target share is higher than Phillips.

Keenan Reynolds ($7,400) has played 100% of the snaps the last two weeks and had eight targets in Week 2. Bradon Silvers is an aggressive quarterback in terms of pushing the ball downfield and Reynolds looks most likely to be on the backend of one

Jeff Badet’s ($8,600) snaps and routes run do not pop off the charts because he was dealing with an injury he sustained at the beginning of the game.

The Guardians are allowing the most fantasy points to the wide receiver position which is why I highly recommend stacking Pierson-El ($10,100) and L. Washington ($8,000) or at least one of them with the Battlehawks QB. Washington is a bit cheaper and is the wide receiver one on the outside for St. Louis. New York gave up a ton of big plays to outside wide receivers in Week 2.

Eli Rogers ($9,700) ranks third in the XFL in targets (16) and missed a bigger game last week when Cardale Jones just missed him in the end zone. The Defenders’ offense is in a great spot versus LA this week so Rogers would be a player that could have a higher ceiling game store in Week 3.

If we have learned anything up to this point it is that you need to have running backs that are featured in the passing game. That is why I think that Donnel Pumphrey ($7,000) is a running back to target aggressively in GPPs. The Wildcats have allowed the most touchdowns to backs through the first two weeks. Pumphrey led the Defenders in carries and added three receptions on five targets in Week 2. According to Pro Football Focus, the Wildcats rank last in terms of the run defense and second-worst in tackling. The top running back to finish that last two weeks has played versus the Wildcats.

The other running back I am targeting is Lance Dunbar ($6,600). Lance Dunbar played second-fiddle to Cameron Artis-Payne but still saw six targets again in the passing game for a second straight week accumulating five receptions. He is also averaging over 6.5 yards per attempt. Dunbar and CAP are both top-three in the XFL in routes run at the RB position.

I also think there is a strong chance this D.C. – LA game shootouts; according to PFF, both teams rank in the bottom three in the league in pass rush rate and sack rate. My sneaky GPP running back play would be Larry Rose ($3,500) running back for the Wildcats. Elijah Hood is on the injury report and has been having trouble holding onto the ball. Might make sense for LA to get their backs more involved in the passing game.,

Wildcats homer and DFS Pro Javi likens to Johnson at quarterback. I agree as long as we see him off the injury report his price to lets you jam in a few more studs. Another week back in his second start we should the LA offense take another step forward. We know Johnson can also move. His price is nice too.

For GPPS, my go-to quarterback is going to be Cardale Jones in a shootout in LA. The Wildcats will not be able to get to Jones with their subpar pass rush and Jones finds ways to escape pressure and just chuck the ball down the field. For GPPs stacking him with Rashad Ross ($9,400), I think could unlock a massive ceiling. Ross has not been heavily targeted so far, but he leads the XFL in yards per route run (3.13) of any player with over 100 receiving yards. He is averaging 24.5 yards per reception this season.

I talked about it on the podcast and in my weekly review, but you do not need to get cute here. We have only one team that is favored at home this week and it’s by ten points. The Battlehawks DST is just $3,700. They will be my primary targeted DST. Outside of the St.Louis, you want to target another home DSTs so I also like the Seattle Dragons ($3,300) again at home. Landry Jones made many mistakes in his first game and with Dallas using a pass-heavy approach, there should be opportunities for turnovers. The Renegades are first in pass play percentage and first in yards per play.