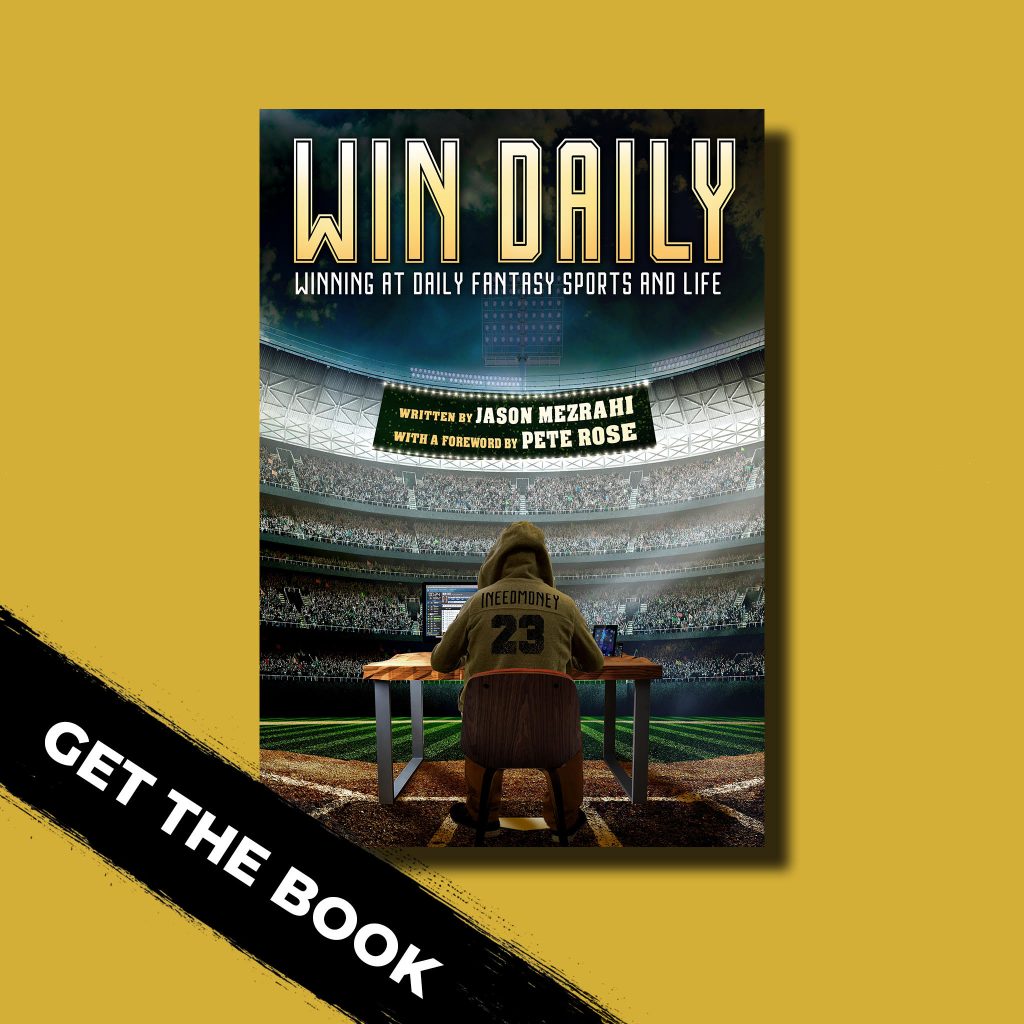 When I was approached by Jason to write this foreword for him, to be honest I had no idea who the hell he was. I heard about Daily Fantasy Sports but never heard of the people behind the screen names. My agent Ryan Fitterman got an email, followed by a call, followed by numerous texts until Jason got Ryan to hear him out. Ryan originally told Jason that we declined his offer for me to write the foreword, but the man just doesn’t quit, and that’s what really made me buy into his story. Knowing him for the past year while watching him work on his project, I learned to respect his hustle. The man grinds all day and night and gets back up. He doesn’t allow defeat to get in the way of his goals.

In baseball, they say you are a great hitter if you hit .300 and achieve other milestones in a long career. Hitting .300 makes you a great hitter, but it also means you failed seven out of ten times. I had 4,256 hits in my 14,053 career at bats, leading to a career .303 batting average. That means I failed almost 10,000 times and walked back to the dugout defeated.

When I got to know Jason, I realized he deals with daily defeat as well. Even though his defeat wasn’t at the plate in front of a crowd of people, his defeat hit home because he was holding his family’s future in his hands each and every night. In order to be willing to deal with defeat daily like he and I did for years, you have to have a true passion for the game. Whether you’re playing baseball or playing Daily Fantasy Sports (DFS), you need to have a passion and drive to be the best and leave it all on the line. I’d walk through hell in a gasoline suit to play baseball, and I know Jason makes a ton of sacrifices balancing his work life, his family time, and the countless hours he spends researching DFS. We both grew up during different times and circumstances, but we share a lot in common.

The passion for the game has to be matched by a competitive nature that most people don’t possess. Jason and I have that gift that some people call a curse. We both spent a lifetime hearing words like “Why do you always have to win? Why can’t you just take a break? Why are you so obsessed with the game? Why not take a day off?” We view our competitive nature as a positive trait, and we wouldn’t trade it for the world. It’s something that drives us every day and gives our lives meaning. It gets us back up to the plate after a strikeout and gets us out of bed in the morning after a bad beat, itching to make another lineup. My father taught me that the only way you can make good at anything is to practice, and then practice some more. To practice you need to put the time in and you need to be critical of yourself and adjust when necessary. The more you practice and are prepared the more confident you can be when you get back into the game.

Mindset in life determines how you see the world and how you see yourself achieving your successes. Growing up, I set lofty goals for myself. I was determined to make it to the major leagues, and once I got there, I wasn’t satisfied with just being an average player. I wanted to be the best. Reading Jason’s story, you will see into the mind of one of the best daily fantasy players in the game and someone who broke into the game when it was just getting started. Now knowing his story, I can relate to his journey from the bottom to the top and all the ups and downs in between. Whether right or wrong, we both only know one speed and we push the envelope at every chance we get. I was always the first one to the ballpark, just like Jason, who researches deep into the night and continues first thing in the morning. I never wanted to take a day off, even when we were cruising to the pennant, just like Jason has taken off only a handful of days over the past seven years playing DFS. We live for the game, and it fuels our lives.

The game has brought us both fortunes and left us defeated at times, but without it our lives would never be the same. Competition brings the best out of people like us, and we hope as a reader it inspires you to be at your best. We need a competitive arena to release our energy, and it’s up to you to find yours.

In Win Daily, you will find ways to fuel your passion and take pride in the daily victories you achieve. Win Daily will provide you with insight into the world of Daily Fantasy Sports and specific strategies to help you achieve success. We hope to help you master the skills you need in order to climb to the top of the leaderboard and take home that large sum of money that Jason was fortunate to take home on multiple occasions. In addition, we are confident that after reading this book you will gain the qualities needed to win at the daily game of life. Qualities such as having a positive mindset, which leads to a powerful vision for your future. A strong work ethic, which gives you the confidence to set the highest of goals. Patience and perseverance to deal with defeat and any obstacles that may get in your way on your journey. Focus combined with discipline, which allows you to put the work in, day in and day out, allowing you to stay on a task until it’s done. These are some of the qualities that both Jason and I possess, and we hope we can relay them so that you can win daily at the game of life.