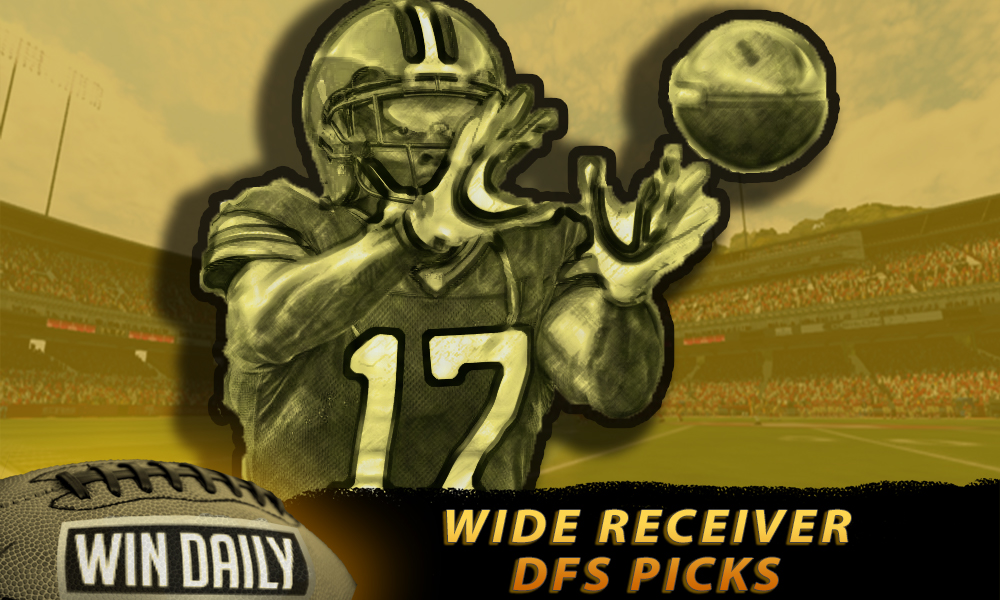 Last week’s article went well but it was nothing special. We got a gem from DeAndre Hopkins but our punt plays did absolutely nothing. That’s going to happen with punt plays though and it’s impossible to get them right every week. With that in mind, let’s get into our Week 8 wide receiver breakdown.

Whenever someone treats you right, it’s silly to turn your back on them. Hopkins was the star of the article last week and we’re going to go right back to the well here. While the nine receptions for 106 yards and a TD is nice, what I like is his usage. In fact, Hopkins now has at least 12 targets in back-to-back games and is second among all WRs, playing 97 percent of his team’s snaps. Those usage numbers should only go up with Will Fuller out for the next few weeks due to a hammy strain. Facing Oakland is the icing on the cake, with the Raiders allowing the second-most fantasy points to opposing WRs this season.

Using players against the Falcons has become a cheat code. This defense is allowing 31.9 points per game which is the second-worst mark in the NFL. That’s led to them posting a 26th OPRK against wide receivers so far this season which is big news for Russell Wilson and his top receiving option. Lockett is just that, leading the Seahawks in catches, yards, targets, and snaps. That’s why he’s averaging 17 DK points per game and that’s bad news for this horrific defense.

Golladay is coming off his worst game of the season but a matchup against Xavier Rhoades will kill any WR’s value. Prior to that, Golladay was one of the league leaders, averaging nearly 20 DK points per game. It’s no surprise when you consider his usage, with Golladay totaling at least eight targets in each of his first five games. That’s really all you can ask for against a defense like this, with the Giants owning a 24th OPRK against wide receivers this season while surrendering the fifth-most yards in football.

This FanDuel price is truly ridiculous. Brown has been performing at a $7,000 level all season long on FanDuel and they’re simply slow to react to his breakout. The simple fact is, this dude is the focal point of this passing game. That’s evident when you see that he’s leading the Bills with an 86 percent snap share and a 22 percent target share. That usage is backed up by brilliant production, with Brown accruing 473 receiving yards this season, a Top-20 total. The best part about all of this is a matchup with the Eagles secondary, with Philly allowing the most fantasy points and yardage to opposing wide receivers this season.

We already professed our love for the Seahawks in the Lockett write-up and that’s going to make it tough to fade Metcalf too. The physical attributes from Metcalf are truly special, setting records at the combine for strength and speed. That talent is one thing but he’s showing flashes of that on the field as well. In fact, Metcalf is averaging 10.7 DK points per game over his last three fixtures, becoming a much bigger part of this offense. His nine targets in Week 7 actually marked a career-high and that directly correlated with the Will Dissly injury. Look for Metcalf’s targets to continue to rise over the second half of the season, as he could become a red-zone threat too. Not to mention, he’s already playing 77 percent of the team’s snaps and that could rise the more he gets used to this offense.

Davis is honestly one of the most frustrating players in fantasy but any top WR for a team is worth a shot at this price. That’s just what Davis is, leading the Titans in snap share, targets and total catches. That’s led to Davis averaging 13 DK points per game over his last four fixtures, which is way too good for a player in this price range. Inserting Ryan Tannehill behind center has apparently revived this passing game too, as his 312 passing yards in Week 7 is easily the best mark of the season. That’s terrifying for a terrible secondary like this, with Tampa owning a 28th OPRK against WRs this season.

Hopkins is an easy bet to succeed but Stills is the sneaky guy in this offense. With Will Fuller (hamstring) out, Stills could be in line for his biggest workload. If you take out a game where he got injured, Stills actually has eight catches for 194 combined yards over his last two games. More importantly, he played 94 percent of the teams snaps last week and it’s clear they want him in that number-two spot while keeping Keke Coutee in the slot. If you get a WR playing this many snaps against a defense like this at this sort of price, you don’t fade him!

Tate just continues to be disrespected by these DFS sites and it’s hard to understand why. Over his last five games, Tate has never played fewer than 89 percent of the team’s snaps. That’s led to him collecting at least six targets in all five of those fixtures, amassing 40 total targets in that span. That’s a monstrous role from a player priced this cheaply and this matchup is better than it looks on the surface. While Tyler Boyd will be suctioned up by Jalen Ramsey, Tate should feast on this otherwise subpar secondary. That’s especially big considering Cincy should be throwing a lot, entering this matchup as a 13-point underdog.

Anytime someone has 12 targets in back-to-back games, they’re a great bet for at least seven catches. It happens to be a guy with the best hands in the league and he could see even more targets with Will Fuller now sidelined. The matchups isn’t too shabby either.