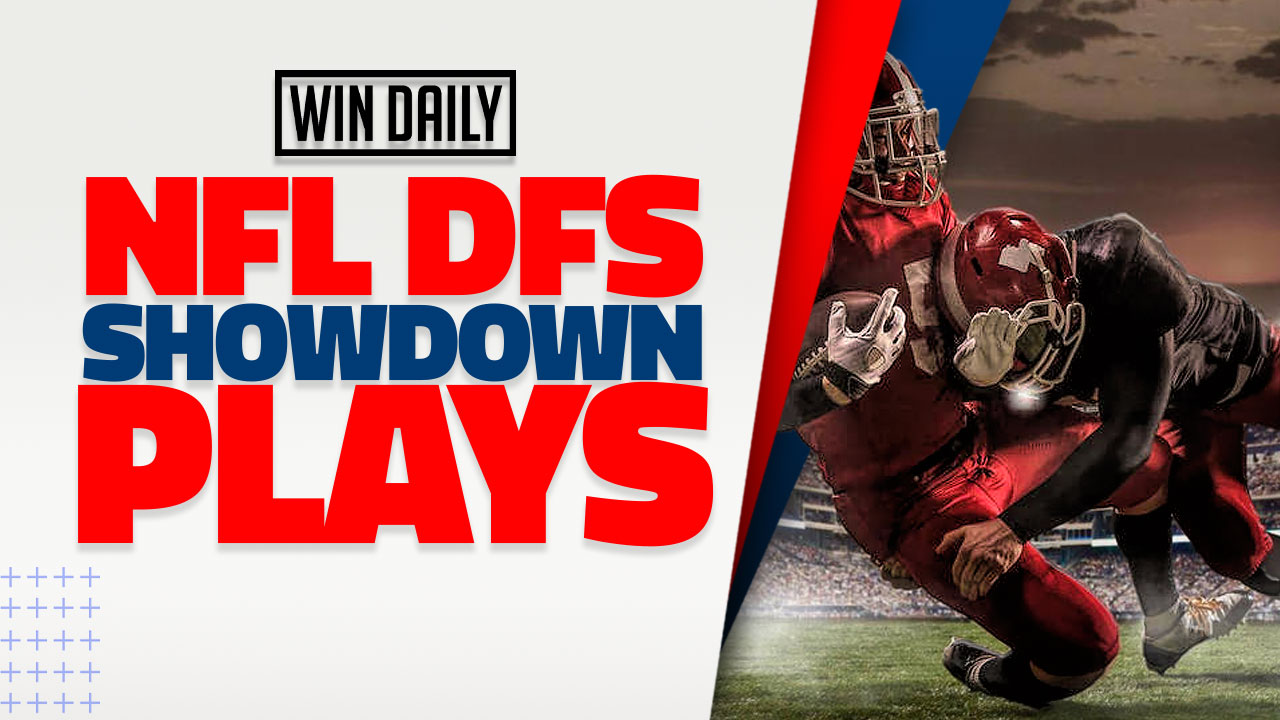 The NFL DFS season continues with the Thursday night showdown, and we’ve got the breakdown to help you win big money in the first Week 2 NFL DFS contests!

Some notes on the differences between MVP on FanDuel and DraftKings: The 1.5x point boost on FD comes with no salary penalty, while and DK also bumps the salary to 1.5x – a crucial factor in deciding who we can and cannot afford on both sites. We can use this to our advantage on FD by occasionally targeting non-QBs to establish more variance and more unique lineups, and on DK it allows us to build more hearty overall stacks when we punt the MVP position with a cheap but high-upside player.

We don’t have an obvious chalk play at captain for this week’s showdown, but when the final tallies are in, it’s likely to be one of the two starting QBs. Both Daniel Jones and Taylor Heinicke have high ceilings and low floors, and while it’s rare that we focus on a RB in the top spot in showdowns, this might be the week to give Antonio Gibson the opportunity to carry us to victory. It’s also a week where leaving a large amount of salary on the table shouldn’t concern us too much.

Giants notes: Even against a solid Broncos defense, Jones tallied 22.38 DK points. His 267-1-0 passing line was inefficient but his fantasy total got a boost from a 27 rushing yards and a rushing TD, also tempered by a lost fumble — something that continually plagues the third-year QB. This week, he’ll be without TE Evan Engram again, and reports of a limited Saquon Barkley could further complicate the Giants’ offensive outlook. While a full-strength Barkley is a player I’d be looking to force into my showdown lineups, I have almost no interest in paying full price for the guy in a reduced role. I’ll have some exposure, but I’m a lot more interested in getting shares of top target Sterling Shepard and Darius Slayton, who’s done nothing but exceed expectations since he entered the league, even when he’s playing hurt. I’ll also find ways to get some exposure to a seemingly healthy Kenny Golladay, TE Kyle Rudolph, and backup RB Devontae Booker — especially if we get word he’ll assume a much larger workload. There’s a good chance that we get a negative game script where Booker sees a few extra targets in the passing game.

Washington notes: Some of my builds will immediately start off locking in Heinicke/Gibson with WR Terry McLaurin, and I’ll have a few more that add in TE Logan Thomas, a top 10 fantasy tight end who had just three targets last week but should normally be seeing 6-8 on a weekly basis. I don’t view McLaurin as a must-play in this particular matchup, but he does have a high ceiling. If you’re playing cash games, we can probably finalize an ideal build without spending up for the highest-priced WR in the contest. I’ll have the most shares of Gibson, and there’s an easy path to some formidable lineups that start with Gibson/Thomas and then focus on the Giants passing game. In some large-field GPPs where maximizing salary is less of an issue, it’s a good idea to mix in some Gibson/Thomas/Washington DST with a kicker and a couple Giants pass catchers. Dyami Brown saw four targets in his NFL debut but caught just one pass for -2 yards, and there’s always veteran WR Adam Humphries, who I actually liked better with Ryan Fitzpatrick. Still — Humphries and even WR Cam Sims are relatively cheap and could make for a final piece in your builds.

Remember to build your team based on an NFL DFS narrative that makes sense.

DO: Build a trio (or quartet) of offensive weapons for a team that makes sense together

DON’T: Worry about spending every dollar. With Saquon Barkley possibly seeing a reduced workload, there’s plenty of value out there (and a wide enough range of outcomes that don’t prominently feature both QBs having huge days) where you can get a little weird

DON’T: Tread too much in the sub-$1K range this week. I’ve looked it over and there’s just not a lot there to get excited about.

Now that we’ve established some Week 1 NFL DFS narratives and MVP candidates, the best way to round out this piece is with a list of my favorite options in descending order, based on overall value (a combo of salary and projected points):

Don’t forget to read the rest of WinDaily’s excellent football articles this week as you prep for Week1 action!