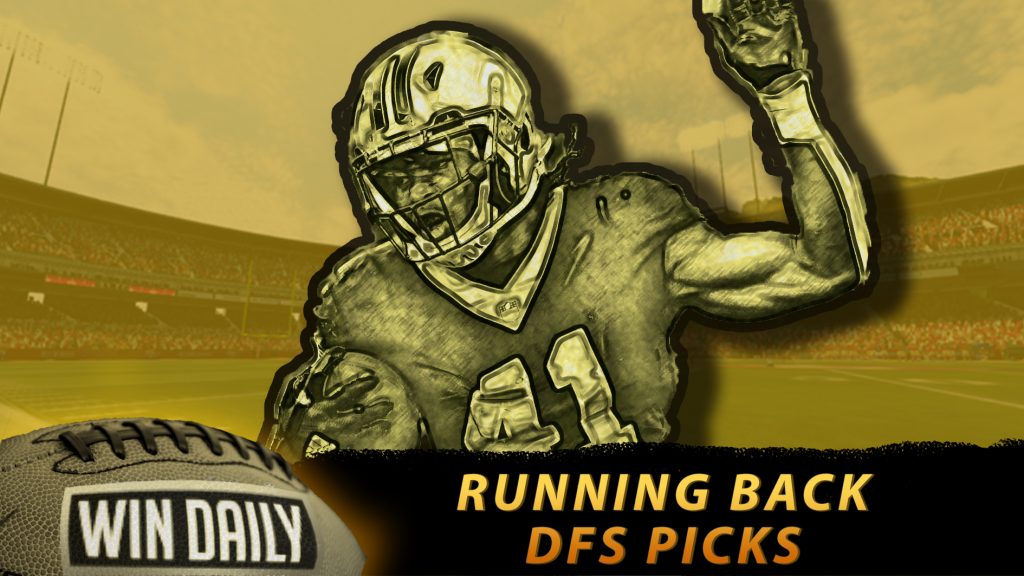 We’ve got your NFL Week 14 DFS plays – the best RBs to use in the main slate, as well as some contrarian picks to win you some major green in huge GPPs!

McCaffrey is coming off his lowest-scoring performance since Week 2, and only the second game since then that he didn’t score a TD. But CMC should have plenty of opportunities to remedy when he visits the Falcons in Mercedes-Benz Stadium on Sunday. Treat last week as an anomaly and take advantage of the $200 price drop on DK!

Cook normally doesn’t have the upside of CMC, but he’s in a great spot versus the Lions, who rank among the worst three defenses in the league against RBs. Cook left the Week 13 loss to the Seahawks on Monday night a little early after injuring his chest, but he’s not on the injury report and there’s no indication he’ll be limited Sunday. He’s got a 10-point floor and 30-point upside and offers a somewhat cheaper option than the top dog.

Henry has been a godsend for DFS players over the past few weeks, and he’s seeking another productive performance against a Raiders defense that’s yielded 134.8 yards from scrimmage per game and 13 touchdowns to running backs so far this season.

Aaron Jones, GB vs. WAS

Jones dealt with some ankle pain last week but this home matchup against the Redskins is about as favorable as you can get. The Packers have an implied total over 27 points, and while we should still see Jamaal Williams (knee) get some work, both backs offer upside in this smash spot.

Fournette is a lock for 20+ touches this week at home against the Chargers, and he’s seen 23 targets over the past two weeks operating as a workhorse back in all aspects on the Jags offense. His floor remains round 10-12 points and he’s got a 30-point upside.

Chubb isn’t cheap, but I could see him matching his production from the Miami game a couple of weeks ago, when he rolled for 106 yards and a TD, adding 3-58-0 receiving. The additional of Kareem Hunt has hurt his week-to-week consistency, but Chubb is in a positive game script here and the Bengals cannot stop him.

Alvin Kamara, NO vs. SF

Kamara has a tough matchup vs. the 49ers on Sunday, but the game is in New Orleans on the turf and this could be a higher-scoring game than the 44.5 game total. The Saints have a 23.5 implied total, and a lot of that should be the fruits of Kamara’s and Michael Thomas’ labor. A contrarian GPP plays for those of you who think the Saints could hand the 49ers their third loss in Week 14.

Even with Melvin Gordon getting regular carries, Ekeler has scored four receiving TDs over his last six games. He’s got plenty of big plays in him due to his speed and elusiveness, and I’m committed to using him in GPPs as a contrarian play once again in Week 14.

McCoy will get the start on Sunday against the Patriots and while it’s not a great matchup, he should see enough involvement to pay off his dirt-cheap price at $4,400 on DK. I’m less interested in FanDuel, where he’s over $6K.

It’s not often you can recommend two RBs in the same offense, but the Lions defense has been so bad vs. RBS that it could be warranted. Mattison’s presence limits Cook’s GPP upside a little bit, and we could easily see 10-15 touches for the backup RB in a positive game script at home this week.

Christian McCaffrey, Devonta Freeman and D.J. Moore are in great spots to bust out for huge fantasy days this week (especially with Greg Olsen out for Carolina), so go big or go home with this 3x bet!