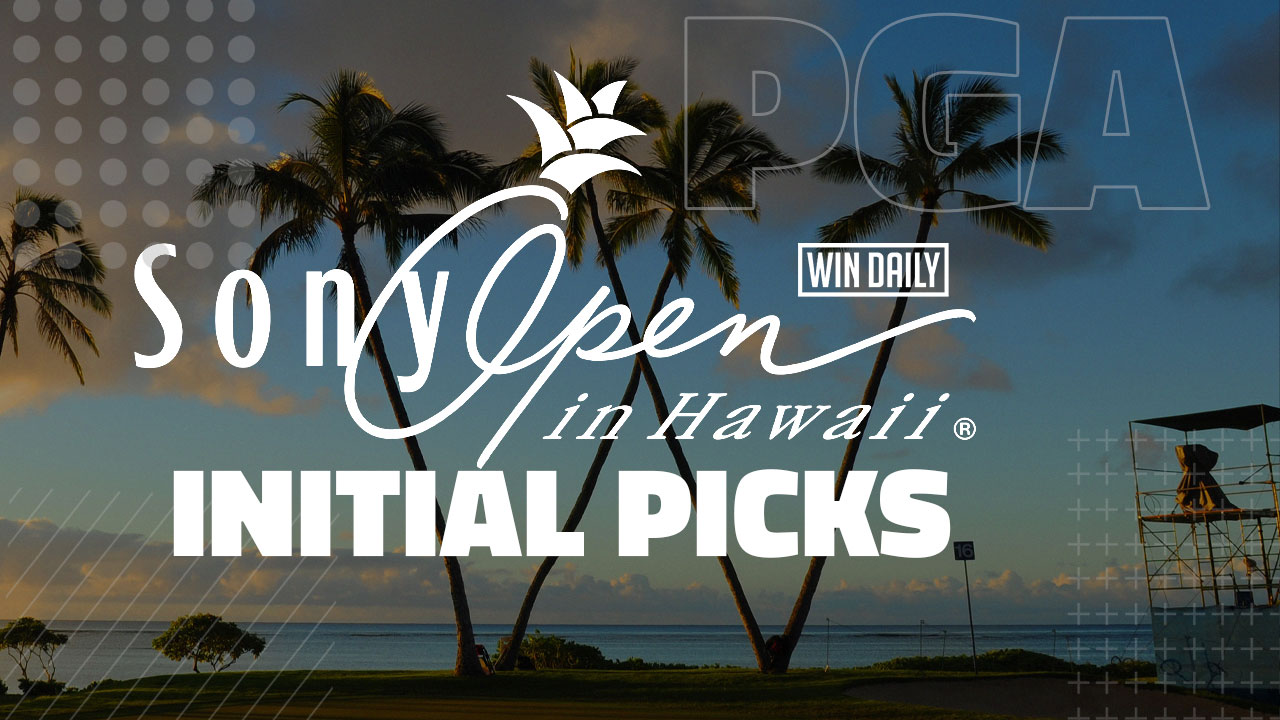 We are back to a full field event here in Hawaii, but this course is not a bombers paradise like last week.  Instead you will want to be accurate OTT and really solid on APP (APP will be my key stat this week).  Below are my initial picks but me and Joel Schrek (@draftmasterflex) will be breaking down the entire slate of golfers tonight at 8:30 EST on the Win Daily YouTube channel and on our Twitter page @windailysports.  Also, stay tuned to the numerous articles, projections and related information coming up within the next couple of days from the Win Daily Golf Team.  Let’s get after it and breakdown my Sony Open initial picks.

Webb Simpson (11000) – Not an impressive finishing position last week, but when you consider he just came off of a bout with Covid it wasn’t too bad.  Webb’s trouble spot was OTT last week but that shouldn’t be a problem for him on this relatively short course.  It’s a perfect course fit and he’s finished Top 5 his last two at Sony.

Collin Morikawa (10600) – Had a tough Sunday but was otherwise pretty great last weekend.  The ball striking is where it needs to be and it will be Collin’s putting that will decide if he’s worth this pricetag.  I think this is the type of field where Collin can get another win in his young PGA Tour tenure.

Sungjae Im (9800) – Speaking of a problematic putter, that is literally the only thing Sungjae did not have going for him last weekend.  He was up to his usual ways in the ball striking department, but couldn’t do it with the short stick.  He still managed to finish 5th last week.  His track record at this course is middling as he’s finished right around the Top 20 his only two times here.  I think we’re catching Sungjae in a good spot.

Zach Johnson (8500) – I’m not normally a ZJ guy, but it’s hard to deny that this course sets up well for him.  He has also been striking the ball very well as of late so I think he has the requisite upside to potentially contend this week.  He has performed very well on this course in the past outside of one MC in 2019.

Charles Howell III (8000) – More like Chalkel Howell III, amiright?  I may end up fading Howell if his ownership percentage goes full Lanto Griffin on us, but we will have to wait and see.  Truth is he has been great at Sony and his recent form has also been solid.  A relatively short hitter who can get hot with the irons should be just fine here.

Emiliano Grillo (7900) – Speaking of hot with the irons, I’m a big fan of this guy and played him a lot last year.  His putting is always the question mark but his ball striking usually is not.

Russell Knox (7400) – Much like Howell, this is a good course fit for Knox and his game has been rounding into form as of late.  He’s got three Top 25’s in his last 4 tournaments and hasn’t missed a cut in his last four at the Sony.

Tom Hoge (7300) – A former ‘secret weapon’ who also sets up well for this course.  When Hoge’s irons are on he is a legitimate threat to take a peak atop the leaderboard and I’m willing to take a chance on him at this price.

Kyle Stanley (7200) – A good ball striker who is very under the radar because he just can’t seem to put the entire game together.  This course suits him and he’ll need to get hot with the putter to make some real noise, but I like the value here.  Stanley had a MC here last year but prior to that was typically landing in the Top 25.  Not much by way of win equity but he could have some big scoring rounds.

Doug Ghim (6900) – Ghim is another guy that rates out really well in the ball striking department, but should have low ownership due to some middling finishes as of late and a MC here last year.

Secret Weapon (less than 7k/less than 5% owned) – stay tuned to our Discord chat.

Thanks for checking out my Sony Open initial picks. See everyone tonight on the Livestream and don’t forget to subscribe to the podcast.

Also make sure to check out our pga projection model!