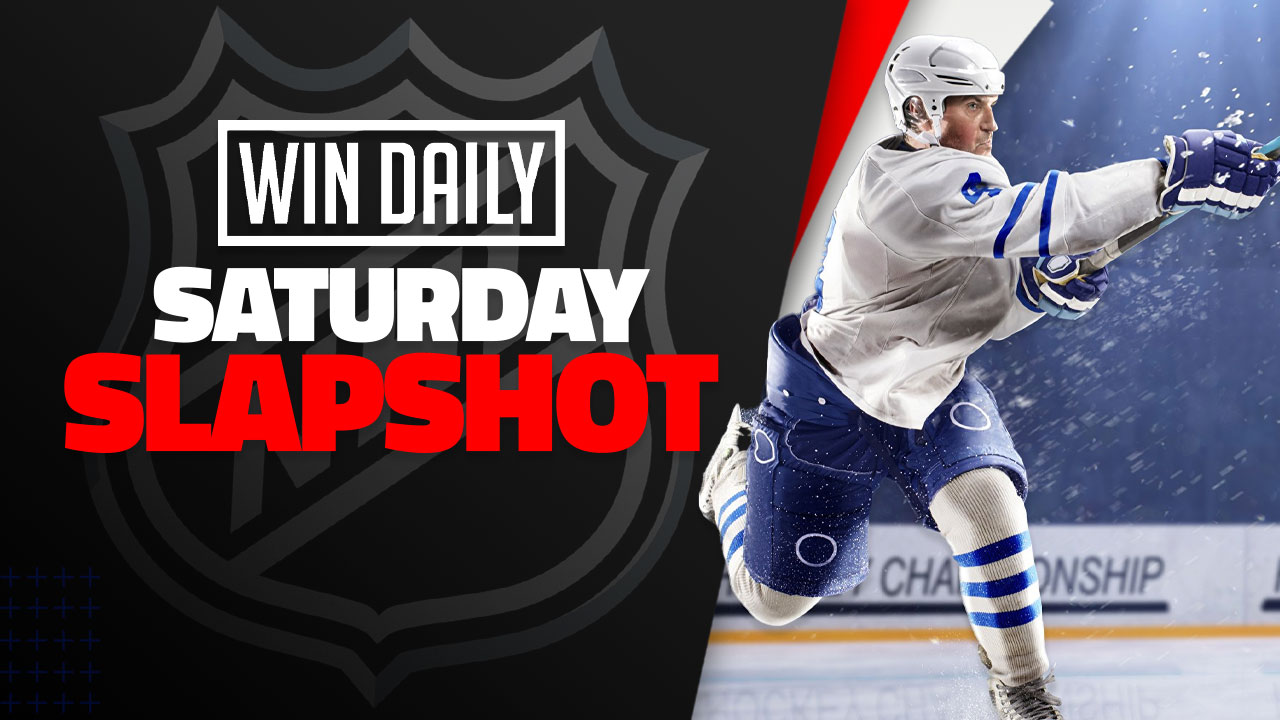 Welcome to the Saturday Slapshot.  We have a monster of a slate tonight with 12 games on tap. While the marquis matchup of the night will be the Bruins vs. Avalanche, I’ll be looking elsewhere for offense as both teams can shut down offenses.

Karel Vejmelka ($7.3K DK/$7k FD) vs. Vancouver Canucks – Karel Vejmlelka is one of the more volatile goalies in the NHL. If you have played him in NHL DFS before, you’re well aware of the swings he’ll give you. On any given night, he can net well over 20 DK points thanks to the volume of shots he gets. He can also net you single-digit points just like he did the other night vs. the Kings. I’m more of a GPP player and he’ll be my lock for GPP’s tonight thanks to his price point and upside.

Vitek Vanecek ($8.3k DK/$8.5k FD) vs. Philadelphia Flyers – We saw some struggles out of Vanecek on Thursday night vs. Nashville as he gave up 4 goals on just 24 shots. It happens sometimes and while the Predators’ offense hadn’t really been clicking of late, they do have some firepower. I’m more than willing to go right back to the well tonight with Vanecek in a solid matchup vs. a bad Flyers team.

The Flyers are just 1-4-2 over their last 7 games and are scoring just 2.14 goals per game during those 7. They’re struggling and we’ll want to attack them with a goalie. Look for Vanecek to return to form tonight and end up being one of the top-performing goalies of the night.

The New York Rangers get a great matchup tonight vs. a BAD Chicago Blackhawks team. The Blackhawks are giving up over 5 goals per game over the last 2 weeks. That’s just awful. Even though they played last night and may have tired legs, tired legs are still better than what the Blackhawks are putting out nightly.

The Rangers put together this line last night and it paid dividends immediately as Kravtsov had a goal thanks to a helper from Panarin. This line, while risky, has immense upside. They are also dirt cheap as Kravtsov is only $2.5k on DK. Although Chytil didn’t get any points last night, he did have 5 shots on net. If this line plays like they did last night, the skies the limit for them in this one.

Over his last 7 games, Carter Hart has given up at least 4 goals 5 times. That is not good and that is 100% something we want to exploit with our stacks, especially with one of the top players in the NHL. Jack Hughes is one of my favorite plays of the night.

Over his last 5 games, he’s been dynamite, with 5 goals and 2 assists. His 12 goals on the season are already the second most he’s had in his career and if he can stay healthy and play a full season, he’ll obliterate his career high of 26. I’ll pair him with his cheap linemates of Haula and Mercer. Both guys have 4 assists over their 5 games and are $4k or less on DK.

I’ve given 2 cheap stacks so far, let’s go with an expensive one here. The Oilers get the luxury of facing Jake Allen and the Canadiens tonight. Although Allen had a monster night vs. Calgary on Thursday, he had games of 6 and 7 goals allowed in the month of November. The Canadiens have lapses where they forget to play D and against a potent duo of McDavid and Draisaitl, that’s a recipe for disaster.

There’s not much I need to say about McDavid and Draisaitl to sell you on the benefits of playing them tonight. They are 2 of the best players in the game and have combined for 15 points over their last 5 games. They are expensive, but there’s enough value between the Rangers and Devils stack to fit them in. Hyman also makes a nice addition to this stack. Although he hasn’t scored a goal in his last 5 games, he has an ixG of 4.51. He’s due and part of a dynamic line.

This has the makings of an extremely fun NHL DFS slate. We have some top lines in great spots. Expect a high-scoring slate tonight.