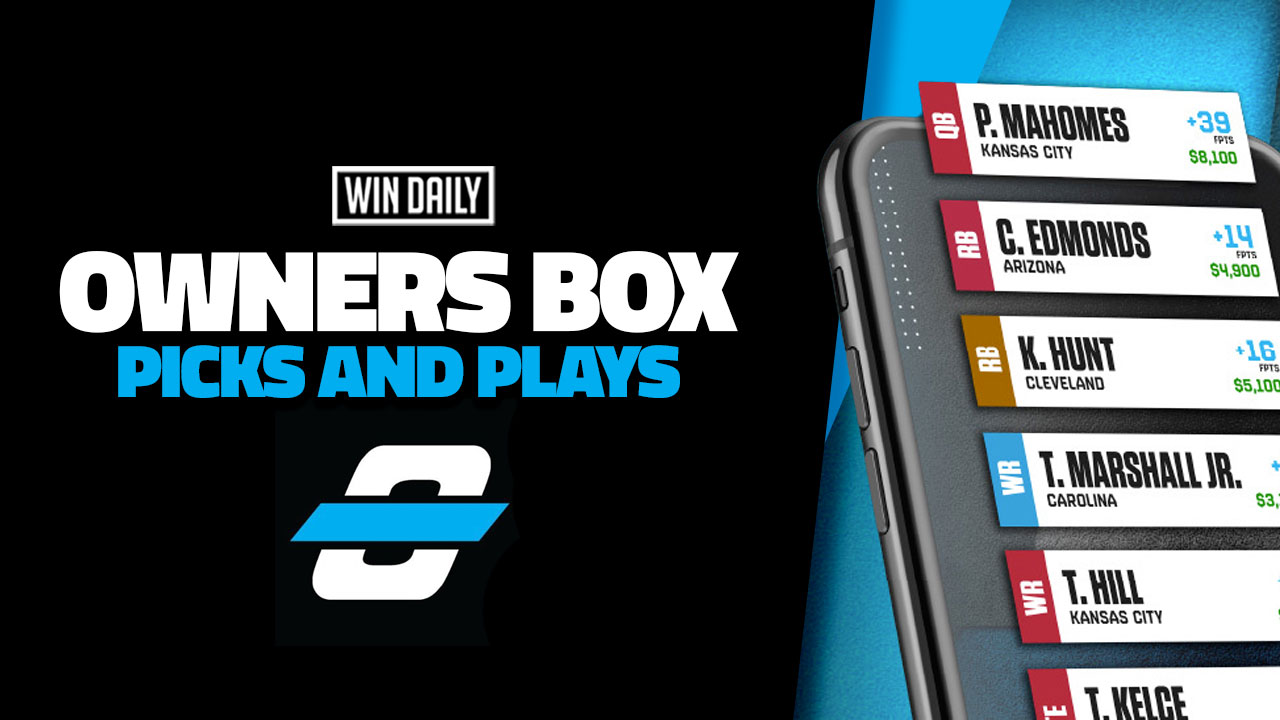 Welcome to the Week 17 edition of Picks and Plays for OwnersBox. Here I’ll be highlighting some of my favorite plays for their SuperFlex Salary Cap game, a revolutionary new way to play fantasy football that brings a new strategic alternative to the traditional season-long formats and daily fantasy games.

Not yet a member of Ownersbox? Click the button below to join using promo code WINDAILY to get a $25 bonus after your first deposit as well as a free entry into their $15k weekly NFL tournament.

As we get closer to the end of the year, some of the things we’ll want to keep an eye on our narratives.  Which teams are still in the hunt?  Are there players close to hitting their bonuses?  Which players are potentially playing their last game for their respective teams?

Let’s dig in and see if we can find some players that will take us to the top.

Russell Wilson $6.6k vs. Detroit Lions – To say this season has been a disappointment for Russell Wilson would be quite the understatement.  He’s missed time due to injury and he’s on pace to have one of his worst statistical seasons.  His name has started to pop up in numerous trade rumors and there is a very real chance that Sunday afternoon’s game against the Lions is the final time he’ll play in Seattle as a Seahawk.

He could not have asked for a better matchup for his potential swan song.  The Lions have really struggled against the pass this season.  They’ve given up more than 300 yards to QB’s 5 times and haven’t had a week with no receiving touchdowns since week against the Eagles.  In what is potentially his last home game as a Seahawk, Wilson is one of my favorite QB’s in week 17.  Look for him to throw early and often in this one.

Matt Stafford $7.6k vs. Baltimore Ravens – If you rostered Stafford last weekend you walked away with a dirty taste in your mouth.  Going into the week he was the stone-cold chalk against the Vikings.  My hope here is that it lowers his ownership as he gets a tasty matchup this week.  Ravens just got torched for over 500 yards passing last week against Joe Burrow and the Bengals.  Look, I’m not going to say that Stafford is going to get anywhere near 500 yards passing.

What I do know is that he’s going to take full advantage of a secondary that’s been absolutely decimated by injuries throughout the 2021 season.  No team in the NFL has given up more passing yards than the Ravens.  It’s been a struggle for them week in and week out.  They’ve given up greater than 400 yards 4 times.  That’s just downright bad.  I fully expect Stafford to rebound from his poor performance last week and be one of the top-performing QB’s in week 17.

David Montgomery $6.8k vs. New York Giants – Growing up as a Giants fan it pains me to see what’s happened to this franchise.  It doesn’t pain me enough to gloss over a juicy matchup.  Only a handful of teams have given up more rushing yards this season than the Giants.  On Sunday, I want to exploit that and I’m going to do just that with David Montgomery.  Over the last 7 weeks, the Giants have given up greater than 100 rushing yards 5 times to running backs.

In 3 straight weeks, they’ve given up more than 120.  They’ve also given up at least 4 receptions to running backs in each of the last 3 weeks.  This all sets up beautifully for Montgomery as he thrives in situations where he can catch the ball.  Montgomery has one of the best matchups of any running back this weekend and I’ll be sure to lock him into my lineups.

Jones filled in admirably last week for Fournette with 65 rushing yards and 1 touchdown against a slightly tougher opponent in the Panthers.  With Fournette on the IR, Jones will get the bulk of the carries again and stands as good of a chance to get a touchdown as anyone else in week 17.

Rex Burkhead $5.3k vs. San Francisco 49ers – Rex Burkhead is having a career year.  He’s set career highs in rushing yards and attempts, and he’s just 2 touchdowns shy of tying his career-high of 5.  Last week he had arguably the finest game of his career filling in for David Johnson as he rushed for 149 yards on 20 carries.

While I doubt he comes close to that production this week against a much tougher 49ers defense, I do expect him to continue to contribute and he’s very affordable.  Should David Johnson miss week 17, I like Burkhead’s chances of reaching value this week and helping us afford some of the more expensive players.

Cooper Kupp $8.1k/Odell Beckham $5.9k/Van Jefferson $5.1k vs. Baltimore Ravens – If using Stafford this weekend, I’ll want to make sure to pair him with one of his wide receivers.  I don’t need to sell you on Cooper Kupp.  He’s having an MVP and historic type of season.  Kupp is an excellent play anytime he steps on the field.  That said, he’s extremely expensive and you’ll have to sacrifice in other spots to play him.

An affordable way to stack your lineup with Stafford this weekend is with either Odell Beckham or Van Jefferson.  Over the last 4 weeks, Beckham has 23 targets while Jefferson has 19.  There’s not much difference in production between the 2 and if I had to pick I’d go with Jefferson to get the $800 savings.  All three of these guys have the potential to have monster games this weekend.  Lock and Load with the guy you can afford.

Marquez Valdes-Scantling $4.9k vs. Minnesota Vikings – MVS is a very boom or bust play.  He can burn your lineup as easily as he can get you to the top of the leaderboards. With him returning this weekend after a bout with COVID, I like his chances of returning value at this price point.  Against this same team in week 11 MVS was targeted a season-high 10 times and went for 123 yards, also a season-high.  The Vikings are an awful team against the pass, regardless of what happened last weekend vs. the Rams.  I love MVS this weekend and he’ll be one of my locks.

Braxton Berrios $4.5k vs. Tampa Bay Buccaneers – We need a cheap flyer to afford our expensive pieces.  Braxton Berrios hasn’t done a whole lot this year, well at least when they’ve been fully healthy.  Should Crowder miss week 17 I really like Berrios.  When Crowder has missed action this season, Berrios has played a more significant role in the offense.

In weeks 1 and 2 he saw a combined 18 targets.  This past weekend he saw 6 and was able to catch 5 of them.  His 25 routes run were the most he’s had since week 3.  It also helps that he returns kicks as there’s always a chance of a return touchdown like he had last weekend.  Not a safe play by any means, but if you’re a GPP player like me, you need to take some risks.

Mark Andrews $6.9k vs. Los Angeles Rams – Mark Andrews has proved over the last few weeks that the QB throwing to him just doesn’t matter.  He’s going to find open spaces and he’s going to catch whatever is thrown at him.  The Ravens are currently on the bubble of the playoffs and essentially need to win out the rest of the way.  If they have any chance of doing that they’ll need Andrews to continue his torrid stretch.  The good news for Andrews and the Ravens is that they should get back either Jackson or Huntley this weekend.

Gerald Everett $4.9k vs. Detroit Lions – While the big names of the receiving corps on the Seahawks are Tyler Lockett and DK Metcalf, the route I’m taking with Wilson this weekend is to pair him with Gerald Everett.  The Lions have been very susceptible against tight ends this season.  Only three teams have given up more receiving yards to tight ends this season than the Lions.

Everett being under $5k is very affordable and he stands a great chance to attain value.  If we look at the last 4 weeks, Everett has been targeted 17 times and has caught 14 of them.  His 14 catches are just a shade under Lockett and Metcalf and comes at a fraction of the cost with a better matchup.  This is one of my favorite targets in week 17.

One of the things I love to do on Mondays is go back and studying how the winning lineups have been structured.  Week in and week out on OwnersBox the winning the lineup has had a QB in their SuperFlex spot.  Last week was Joe Burrow, week 15 was Davis Mills, and week 14 was Aaron Rodgers.

This week will be Trey Lance ($5.3k vs. Houston Texans).  With Jimmy Garoppolo all but ruled out this week with a bum hand the 49ers will turn the ball over their 2021 first-round pick. Lance started 2 games earlier this season and did very well.  He’s a dual-threat QB as he loves to run when given the chance.  Lance should excel this weekend in a great matchup.

Good luck and hope to see you in the green this week!