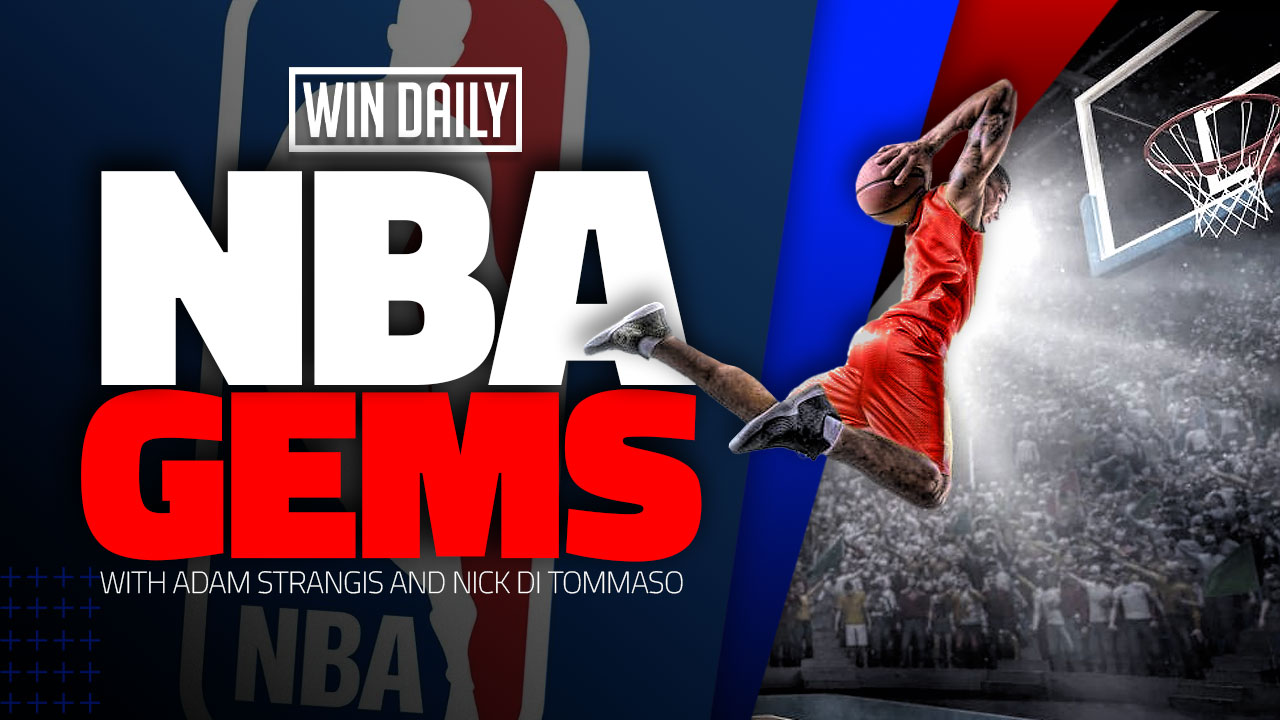 As players continue to get ruled out on a daily basis, we’ll continue trucking along while navigating the NBA DFS world in the same fashion we always do. By focusing on elite game environments, we are able to prioritize which of the short rotations and stars we want exposure to. It’s Mojito Monday’s edition of the Gems – let’s ride.

One thing I want to clarify based on the questions I have received over the past few years is that I will never list a player under the $5,000 price tag simply because I use the projection model to identify all targets in this range and below. While there are often plenty of options that I like at $5,000 and less, since I often find myself with not only one – but multiple – in my NBA DFS lineups, you all have access to the very model I use to make my own selections, so when asking yourself: “Should I use player X or player Y?”, make sure to check the model because that is how I make all of my own decisions and I truly ride or die by it on a daily basis.

Before running to the DraftKings, FanDuel, or Yahoo lobby to construct your NBA DFS lineup after reading this article, please make sure to utilize the abundance of tools we have at Win Daily:

The Bulls were the first team to be hit with the majority of their players landing in health and safety protocols, and now, they are back in trouble with Lonzo Ball, Alfonzo McKinnie, and Tony Bradley listed as out, joining Alex Caruso (foot) and Derrick Jones Jr. (hamstring) on the sidelines. In such a scenario, we can turn to the trio of DeMar DeRozan, Zach Lavine, and Nikola Vucevic at the top of the pricing grid of tonight’s NBA slate, while Coby White and Javonte Green are good value pieces in an up-pace matchup versus a thin Atlanta rotation. The Hawks, meanwhile, will still be without Trae Young, Danilo Gallinari, Lou Williams, Kevin Huerter, De’Andre Hunter, Timothe Luwawu-Cabarrot, Onyeka Okongwu, and most recently added to the health and safety protocols, John Collins. This essentially leaves the Hawks with:

While they are no longer as close to the minimum price as they were just a week ago on both sites, we’ll need at least two Hawks tonight, if not three, but look for updates in Discord. It’s that simple when it comes to this rotation.

In what would have been a marquee matchup between Kevin Durant and James Harden versus Paul George, the Nets/Clippers game is still atop my priority list on this NBA slate. While the Nets did get numerous players back from health and safety protocols, the Nets are still expected to roll out a similar rotation as they did on Christmas Day, which only saw six players see 24 minutes or more. James Harden is now sporting a 38.2% usage rate in three games without Durant this season, where he’s averaged a 32.3/10.3/8.7 scoring line while taking 22 FGA per night. We love to play primary ball handlers versus the Clippers, and there simply is no player I want to put into my lineup before The Beard. On the flip side of this game, Paul George will be out for the next 3-4 weeks, meaning there is immense value in the Clippers offense. Eric Bledsoe, Terence Mann, and Luke Kennard will be tasked with handling the bulk of the offensive responsibility, while Ivica Zubac, Amir Coffey, and Brandon Boston will round see an increase in offensive touches as well next to defensive specialists Serge Ibaka and Nic Batum.