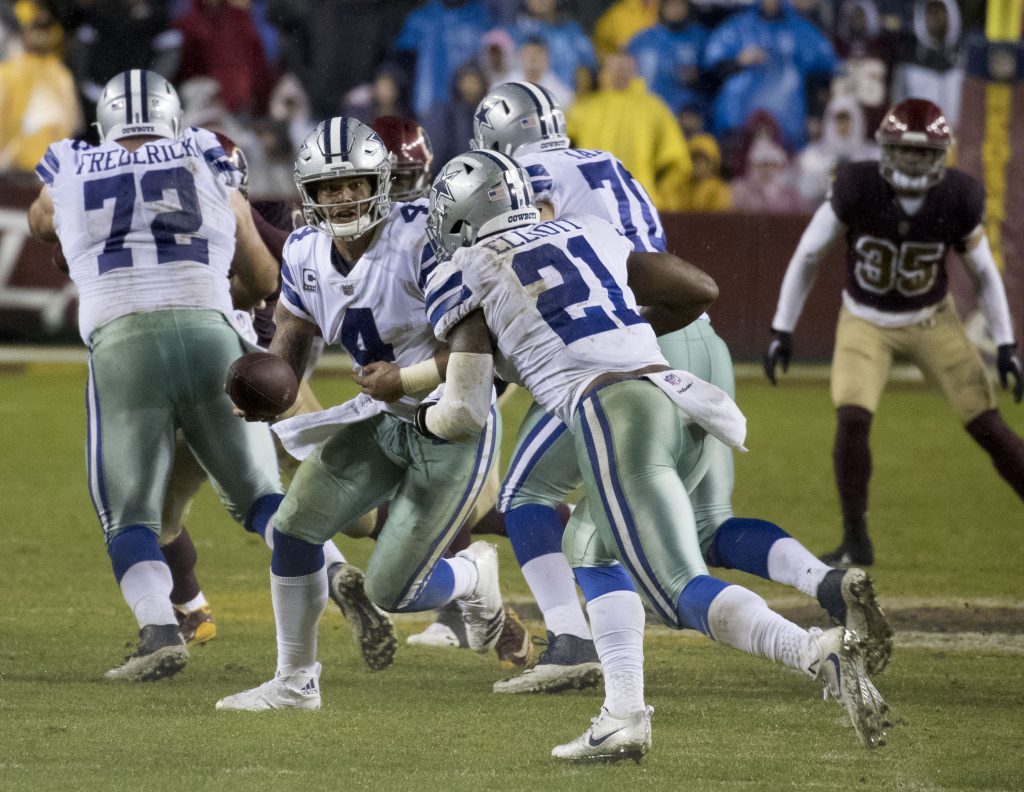 Welcome to my newest article that will be released every Monday. It will come along with a video to break down Monday Night Football in all things DFS. I will be covering value and punt plays, favorite stacks, and my contrarian play of the game. So who is ready for some Monday night action between the Giants and Cowboys? All prices discussed are via DraftKings in their Monday Night Football Showdown Contest.

Wide receiver Cody Latimer ($800) is by far the cheapest player that will see significant snaps. Sterling Shepard has been ruled out for Monday Night Football so Latimer should see similar work to what he saw last week. In Week 8, Latimer played in 44.6 percent of the snaps and ran 26 routes. He should not be priced lower than Bennie Fowler ($1,200). He has 74 receiving yards on eight targets back in Week 1 when the Giants first played Dallas.

With the Dallas Cowboys favored by 6.5 points in a game with a total of 48.5 points, the best builds are about incorporating the Dallas Cowboys key offensive players. The Giants are allowing opposing passers to throw for 8.5 yards per attempt (third-highest) and 7.6 yards per attempt over their past three games. Dak Prescott ($10,400) is averaging 8.6 yards per attempt this season. You will want to definitely stack Prescott with his two best receivers Amari Cooper ($10,000) and Michael Gallup ($7,400). Over the past four weeks, the Giants have allowed the sixth-most fantasy points to the wide receiver position.

You can also add Ezekiel Elliott ($11,600) to the stack. The Giants have allowed the seventh-most rushing attempts to running backs at home this season (30.8) at 4.7 yards per attempt. Elliott has scored a touchdown or had at least 100 yards rushing in every career game versus the Giants. Then I would recommend adding in either the Cowboys DST ($5,400) or kicker Brett Maher ($4,000). The Giants, over the past three weeks, have allowed an average of 15.50 fantasy points per game to opposing defenses. Maher is a cheaper player and if it’s a Cowboys offensive onslaught he will score enough for value. He averaged two field goal attempts per game and the Giants rank sixth-worst against kickers over the past four weeks.

Gallup should definitely be played, but a less popular option will be putting him in the Captain spot. However from a targets per game perspective Gallup is averaging eight per game, whereas Cooper is averaging the exact same amount. But Cooper will be much higher owned as a captain.

Now the most contrarian play is going heavy on the Giants’ offensive players. Saquon Barkley ($11,400) figures to be less-owned than Elliott, but I am not sure it should be like that. In his three career games versus the Cowboys Barkley has surpassed 100 yards from scrimmage. If the game projects the Giants as trailing, Barkley could see a ton of work in the passing game as well. Evan Engram ($7,800) has a good matchup versus the Dallas defense that ranks fifth-worst versus the tight end position. Engram has also had a touchdown scored in three straight games versus the Cowboys and has averaged 88 receiving yards, 7.6 receptions, and 9.6 targets.

Randall Cobb ($4,800) caught four of his five targets for 69 yards and one touchdown in his first meeting versus the Giants. Golden Tate ($6,800) was suspended in their first matchup versus Dallas. Tate in the Captain spot is very contrarian because he could easily lead the Giants in receptions and targets. He just needs to find the end zone. Darius Slayton ($5,700) is another player that did not play in the team’s first matchup versus the Cowboys. He has big-play upside has he leads the Giants in total air yards and has an ADOT of 18 yards.