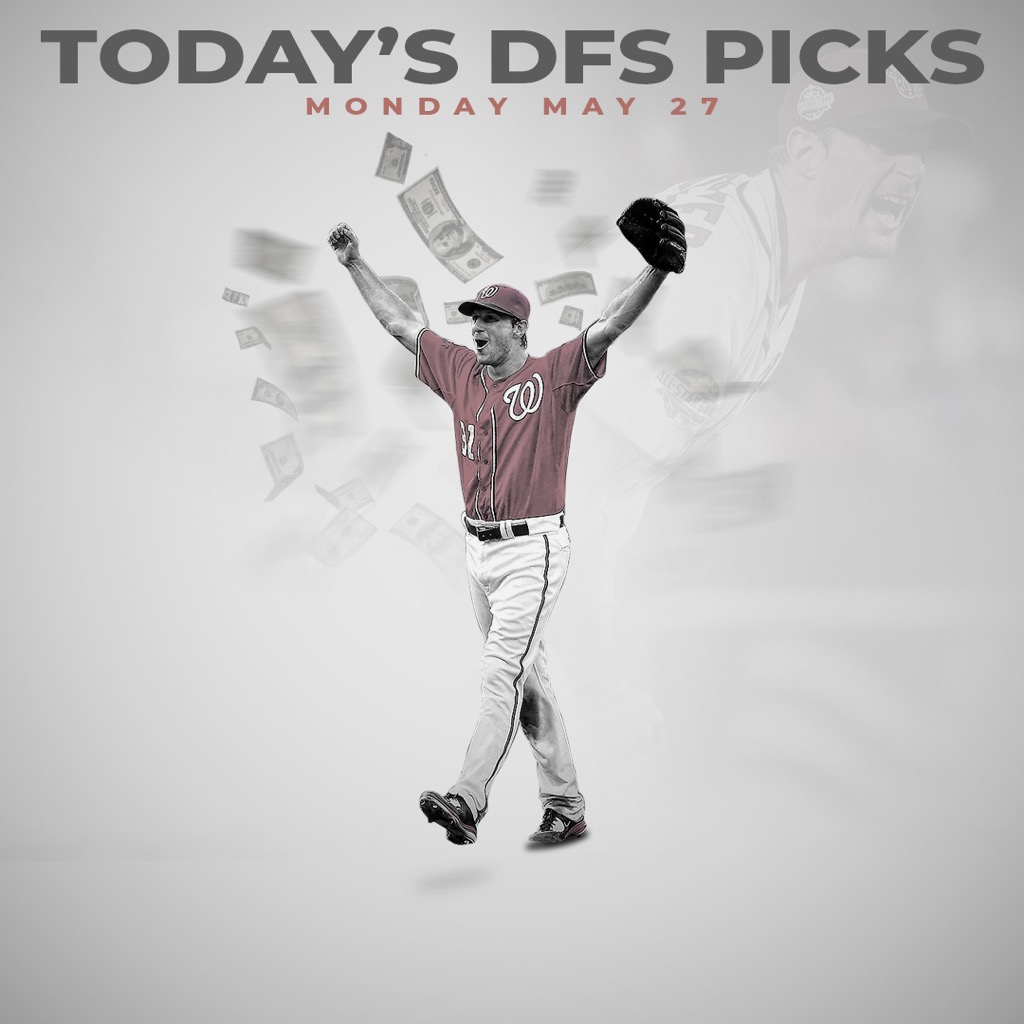 This holiday we remember the brave men and women who fought for our freedom. Part of that freedom is the ability to play DFS. FanDuel has today’s slate broken into three different time frames, all-day, early-only and the main slate starting at 7:10 eastern. DraftKings has the all-day and the night slate starting at 7:10.

Max Scherzer, Marlins at Nationals ($11,800 FD, $11,100 DK): Though much has been made about Max’s “rough start” to the season, he is the same pitcher he has been the last several years. He has just been a tad unlucky. His FIP (Fielding Independent Pitching) and xFIP (Expected Fielding Independent Pitching) remain elite at 2.35 and 2.89 respectively and are actually better than last season and besides 2015’s xFIP of 2.88, are the best of his career. So as long as he keeps pitching similarly, we can expect a few lucky breaks, some bullpen improvement, and better matchups to come his way. Speaking of matchups, the Marlins rank dead last in OPS, runs scored and home runs. If you can make his salary work, he is a cash game option.

Luis Castillo, Pirates at Reds ($9,600 FD, $10,700 DK): windailydfs.com CEO Jason Mezrahi and I chatted on the podcast recorded for today about using players coming off a disappointing performance because that artificially decreases ownership percentages. We were talking more about batters (like Gray Sanchez for today) but arms can be considered as well. Look no further for that example than Castillo, who is coming off his worst start of the season by far. He lasted only 2.2 innings against the Brewers on May 22nd while giving up five hits, four runs, two home runs, three walks and struck out only two. Before that game, he had given up more than two runs in a start only once, struck out more than six every time except once and had only given up three home runs on the season. Look for him to bounce back, and be under-owned today. His talent and matchup make him a cash game option.

Lance Lynn, Rangers at Mariners ($8,700 FD, $8.600 DK): The former Cardinal ace has rediscovered himself in the Dallas-Fort Worth area, much like his teammate Mike Minor and former Ranger Martin Perez have baffled fantasy baseball experts and become good starting pitchers. Lynn is 2-0 against Seattle this season, combining for 14 innings, 10 hits, three runs, four walks and an astounding 20 strikeouts. One of those appearances was on the road like this one will be. His FIP and xFIP say his improved pitching is for real, as both numbers (3.50 and 4.18 respectively) are better than his actual ERA of 4.67, which is inflated due to his first start of the year against the Cubs when he gave up seven earned runs and one against the Athletics when he gave up eight earned runs. He is a GPP-only option for me because Seattle can hit, though they been better on the road. Another reason to like him is that the Mariners strike out at the fifth highest rate in all of MLB.

Rick Porcello, Indians at Red Sox ($7,800 FD, $7,300): Porcello has been better at home than on the road (3.41 ERA and .266 wOBA vs. 5.76 and .384 away) and the Indians offense is just not good anymore. Their OPS of .666 ranks in the bottom five in the league against righties as well as having a .291 wOBA. I like using Porcello in my cash games as a way of saving off the big guys mentioned above. I really like his chances of getting a win and a quality start.

Daniel Norris, Tigers at Orioles ($6,600 FD, $6,900 DK): I know some statistician out there keeps track of this and I should probably do so myself to prove this to you: all teams, at least for a game or two after leaving Coors Field, struggle offensively. It does not matter if it is the Rockies or the road team leaving Denver. Scientifically, it is proven that curveballs are not as sharp breaking and sliders do not have as much movement in the high elevation found in Denver and thus it would make sense that the batters returning to a “normal” environment could struggle adjusting to these pitches. That is why I may consider using a former top prospect in Norris against the Orioles, even in my cash games today.